Marking the entrance and exit of the memorial, the cast-in-place concrete tower will house forty wind chimes – one for each passenger – designed within Arup’s SoundLab to create an acoustic experience with each gust of wind. The acoustic element was especially important to the architects as a representation of the final moments shared between the passengers and their loved ones via cell phone calls.

“The last memory that many [family members] have of the people on the plane is through voices on those phone calls,” said Paul Murdoch.

The Tower of Voices is scheduled to debut in 2018.

Read more about the memorial, here.

United Airlines Flight 93 was one of the four planes hijacked during the September 11, 2001, attacks in the United States. It was on this flight that 40 passengers and crew members courageously gave their lives to thwart a planned attack on the Nation's Capital. Tragically, the plane crashed in Western Pennsylvania with no survivors. 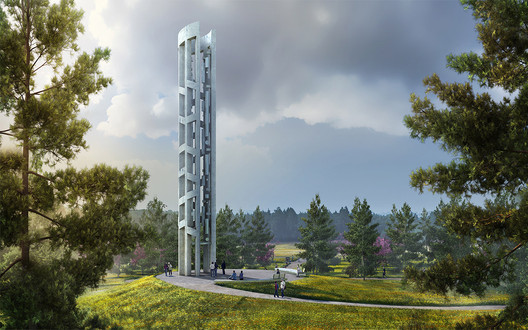