Acting as a social gathering point during the day and an open-air cinema at night, the structure was open for the 74th Venice Film Festival as part of the V-A-C’s Venice Art Biennale 2017 exhibition Space Force Construction – a reflection on the centenary of the Soviet Revolution. 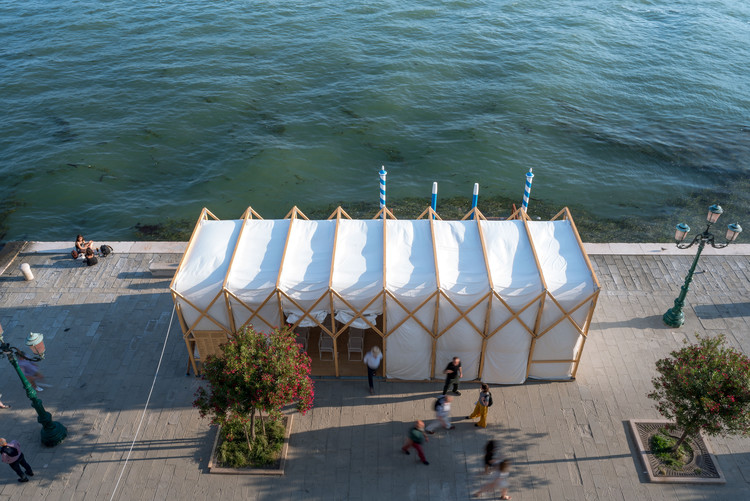 Cinema was a crucial tool for the spread of information during the early stages of the Soviet period, being the most effective way to unite people in a state ravaged by the effects of civil war. The Street Cinema sought to reference the Soviet Agit-train and Agit-cinema and reflect on the powerful influence of visual media on social and political contexts.

The logic of Russian Constructivism inspired the metal elements that hold together the modular wooden structure. These frames could be pulled back and forth, accommodating a range of cultural purposes, from conferences and public discussions to artistic performances and film screenings. The adjustable curtain mechanism furthered the changeable intimacy, dictating the visibility of the activity within from the outside.

The cinema’s flexibility allowed a variety of activities, the first being a performance piece by Russian artist Olga Jitlina as part of Space Force Construction. But given the Cinema’s inspiration, film was the main focus.

Divided into 8 sections, the film schedule presented pieces aligned with ideas of Battleground, Festival, Exhibition, School, Theater, Press, Factory and Home. Each of these represented “a space of critical importance in early Soviet Russia” and addressed “the social, political, economic and artistic shift that marked the emergence of a new state paradigm and social building.”

There is something boat-like about the Street Cinema in the context of Venice, its sail-like skin and mast-like structure pulled in and out along the canal based on the conditions and requirements of the day. It is a clever, elegant design that united the past and present of two very different places through performance, space and film.