The team of Foster + Partners and Branch Technology have been awarded first prize in the latest stage of NASA’s 3D-Printed Habitat Challenge, a $2.5 million multi-phase competition designed to generate ideas and advance technology for the construction of sustainable housing solutions “for Earth and beyond.”

After printing three cylinder and three beams the first two levels of Phase 2, Stage 3 asked teams to design and print a 1.5-meter dome using indigenous Martian soil and recyclable materials, envisioning how future habitats could be constructed on the Red Planet. Teams were required to develop the 3-D printing technology itself as well as the structural design for each dome. The competition also dictated each structure be built within a 22-hour time frame, using the specific materials, geometric tolerances and autonomous performance that would be demanded by the Martian landscape.

After winning first prize in the first two phases earlier this year, the Foster + Partners-led team was again selected as the victors after their concrete dome proved capable of handling a maximum load of 1694 kg, more than double that of any other team. The design was also awarded points for maximizing the use of local materials or mission waste – the winning mixture utilized 30% recycled mission plastics and 70% Martian regolith.

For their victory, Foster + Partner | Branch Technology of Chattanooga, Tennessee was awarded the first prize of $250,000. The team from Pennsylvania State University earned second place and a prize of $150,000.

Learn more about the competition, here. 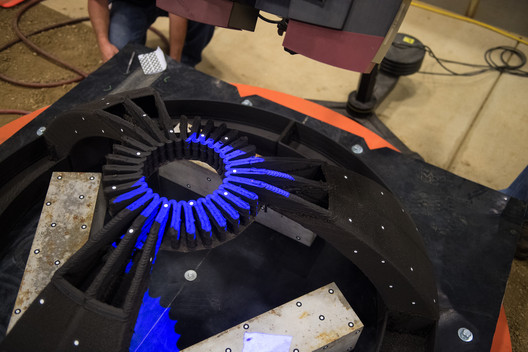