An important step in providing pedestrian access along downtown Monterrey’s main transportation routes, Torre Citica is a 25-storey mixed-use development designed by Austin-based Miró Rivera Architects and Mexican firm Ibarra Aragón Arquitectura (IAARQ) in Monterrey, Mexico. The project is the first of its kind situated over Venustiano Carranza, a significant thoroughfare that links Monterrey with the neighboring municipality of San Pedro Garza García.

Our first priority was the creation of a pedestrian-friendly experience that would enhance the level of activity at the street, said the architects. The project is intended to serve as a catalyst for a municipal plan to provide pedestrian improvements along major transit corridors radiating from downtown Monterrey. 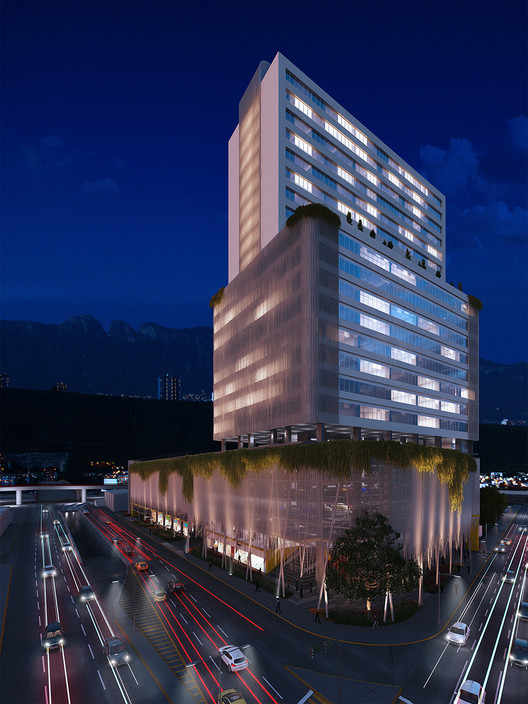 Sitting on a polygonal site with extended frontage, Torre Citica accommodates a variety of shops and restaurants on the ground and second floors, interacting with the outdoor public green space that is shaded by a screen of interlaced steel tubes. The corner of the site is dominated by a grand staircase, acting as an appealing public threshold between the street below and spaces above.

The tubular trellis screen is a consistent element that manifests itself elsewhere in the project, by shading six levels of parking above the commercial programs and providing a framework for hanging vegetation that “recall the overgrown ruins of ancient temples scattered throughout the jungles of Central America.” The lattice unifies the three primary masses of the development.

Above the commercial base, two separate volumes accommodate 8 floors of office space, along with 9 floors of apartment units, which capture views of the northern part of the city to the southern peaks of the Sierra Madre Oriental mountain range. With the long side of the building facing north and south, the east and west facades are protected with vertical trellises functioning as solar screens. In addition to the 87 residences, amenities provided include a rooftop terrace, a pool, and a gym.

Having broken ground recently, the development is expected to be complete by December of next year.

Held annually, the CEMEX Building Award honors the best architecture and construction both in Mexico and abroad. Yesterday the cement company announced the finalist projects located in Mexico, and in categories ranging from social housing to infrastructure.

What becomes of public space once violence is normalized in a city? Though it is naive to believe that architecture by itself can present absolute solutions to complex social and political issues, it is also important to explore and understand its possibilities as an agent of social change, however small.