On July 15, the city of Paris announced the opening of three natural swimming pools that receive their water supply from the Seine River, located in the La Villette Basin in the 19th arrondissement of the city. Spanning a total of 1,600 square meters, the new attraction is divided into a children's area, with depths of up to 40cm; an area of medium depth of 1,2m; and a larger pool, with depths of about two meters.

The swimming pools are part of the "Swimming in Paris" project, presented for the first time by the City Council of The French Capital in June 2015, with the goal of "encouraging the practice of swimming for Parisians and Tourists." According to an official statement from the city government, the project aims to allow, by 2020, the "modernization of water parks and the creation of new swimming pools and areas for bathing."

According to a report by RFI, the project is emblematic because it will be the first permenant public swimming area in Paris. After organizing a series of "dives" (temporary swimming pools on the banks of the Seine), the realization of the swimming pools in the La Villette Basin is an important step for the "Swimming in Paris" project.

The City Council is expecting the pools to attract about 75,000 visitors per day. 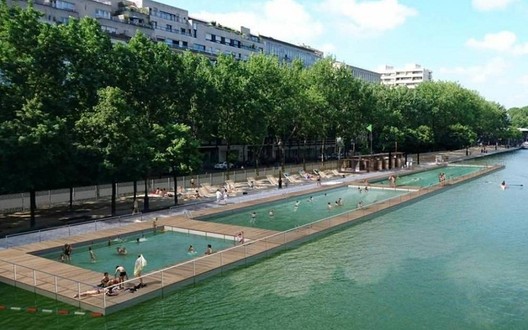