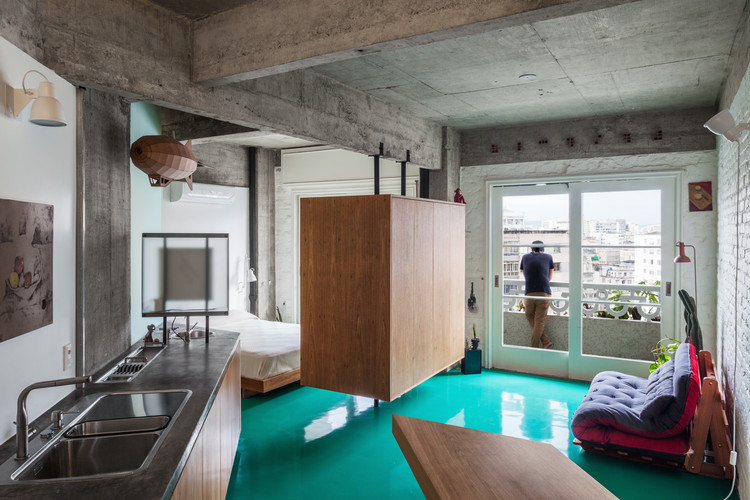 Text description provided by the architects. The Viadutos Building, designed and built by the architect Artacho Jurado during the 1950s, is a historic landmark in São Paulo. Its imposing implantation in an island resulting from the Plan of Avenues of Prestes Maia, centrally demarcates the visual axis of who transits by the Viaduct Nove de Julho.

The apartment in question, in the 18th floor of that building, provides through its terraced area a privileged view of the city downtown. Demolishing all the internal walls of the trimmed original plan was, therefore, an action for which the landscape and the natural light, framed by the original wooden frames, could penetrate the space.

To increase the feeling of amplitude within the 46 m2 of internal area, the division between environments was made through a furniture that floats suspended, without touching the green floor that floods the whole apartment. The timber volume amid the plan has a double function, opening up both to the living room and to the bedroom: while one side is a closet for books and electronics, the other serves as a wardrobe. The concrete countertop functionality also assisted in the organization and space gain,because in it is embedded the laundry utensils, kitchen and the bathroom, separated from those by a mirror suspended on the countertop.

As it was the only closed environment and with little incidence of natural light, the bathroom was enveloped by panels of translucent glass instead of masonry. The acid treatment ensures privacy, but also allows the filtered passage of light, both at the daytime coming from the room, as at night, when the internal artificial light transforms it into a large flashlight.This artificial light is emitted by the technical partition between the toilet and the shower, which also concentrates all the hydraulic pipes, facilitating their maintenance if necessary.

The tall cabinet in the kitchen is another important element, as it constitutes a second flashlight facing the living room. The other indirect luminaires are also loose from the ceiling, releasing the slab and stripped concrete beams from other visual interferences.

Although the area still be the same, the spatial feeling has been completely transformed, from the small subdivided apartment into a large space. This has only become possible thanks to the adopted strategies of materials unification of the two continuous planes, the epoxy floor below and the concrete ceiling above, the visual integration between environments and the maximum functional utilization of all the elements that compose it. 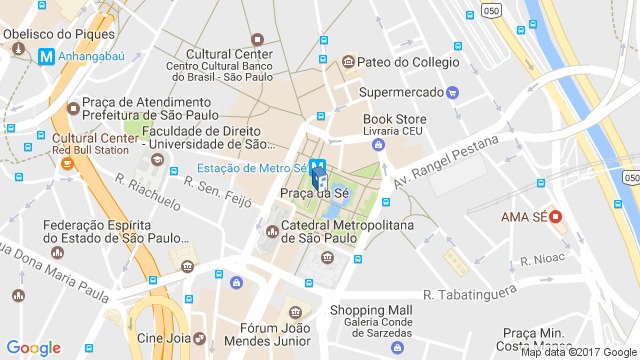 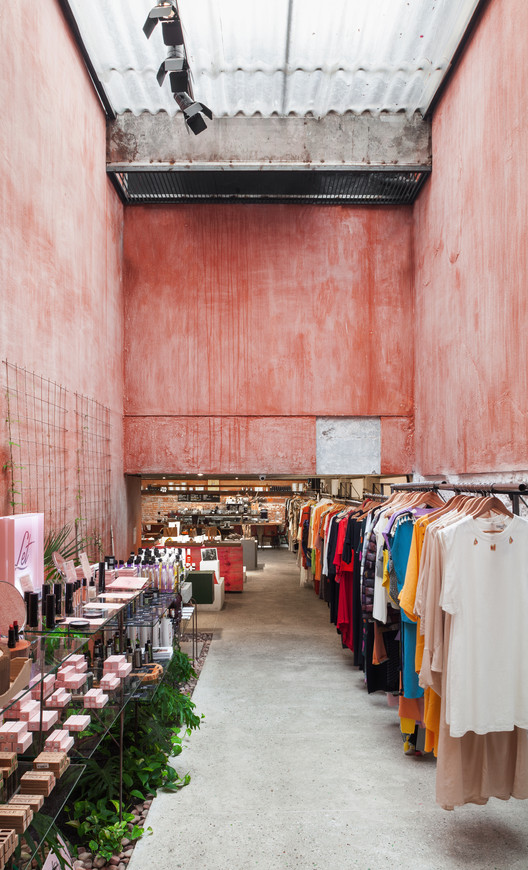