Emerging international architecture office KOSMOS has unveiled 6 projects exploring potential collective spaces in the city of Basel, Switzerland. Unveiled during Art Basel, the speculative projects were featured in the Forum Basel exhibition curated alongside Museum Director Andreas Ruby and Stéphanie Savio, and emerging Chilean practice Plan Común. Held at the Swiss Architecture Museum (S AM), the architecture exhibition was held “in reaction to the increasing commodification of urban space today” and dedicated itself to investigating new possibilities for public space in Basel. Check out the projects, with descriptions from KOSMOS, below.

The more heterogeneous societies become, the more important it is for cities to provide open spaces where we can experience ourselves as part of a community. In the original sense of the 'Museion' of Ancient Greece, S AM Swiss Architecture Museum is transformed into a home for public life.

The project turns Basel’s underground river, Birsig, into a botanical garden, hidden underground, but open for public. Lights, hydropon­ic technology and heaters transform the tunnel’s contained microclimate into warm and humid space. The Hidden Park will serve as a place for ro­mantic walking, botanical explora­tions or transit on a rainy day.

The beautiful Rhine and famous Art Ba­sel are important Basel city landmarks. The "Art Drop" project combines these two main attractions together. It is a new initiative, which pro­poses to create a multifunction­al floating platform, using the existing technology of traditional Basel Ferries, moved solely by the current of the river.

The winter urban spa, “Thermae Urba­no,” takes the idea from tradi­tional Basel fountains and pro­poses to heat up water inside the historical fountain on Münster­platz in winter, to transform it into a space for winter bathing. Steam above the square, half-na­ked bodies in a warm common ritual with amazing winter settings...

The “Unbound Triangle” project gives ‘Dreilandereck’ - the corner be­tween France, Germany, and Switzer­land, a status of exterritoriality and lifts the regulations. Social processes are encouraged, shadowy processes are not prohibited. This speculative project does not pro­pose an architectural intervention but a protocol of deregulation.

A new regime of use of public space in the city’s corporate territories. The territory of Novartis Campus opens to the public outside of office work­ing hours: after 7 PM daily and on Sundays. We propose to redesign the fence of the campus into a transformable wall serving as a separator during working hours and as a continuous canopy outside working hours.

An Invented Protocol for deregulating life in a Swiss city. Analogous to official Swiss Abfuhrplan – a calendar, which meticulously describes the process of recycling and trash collection, we propose a Non-Official Discharge Schedule – an alternative calendar, giving to the citizens' ideas of where to spend good time for free, where to find urban adventures or semi-legal stuff.

In one of his 1922 travel essays for the Toronto Star Ernest Hemingway wrote, in a typically thewy tone, of "a small, steep country, much more up and down than sideways and all stuck over with large brown hotels built [in] the cuckoo style of architecture." 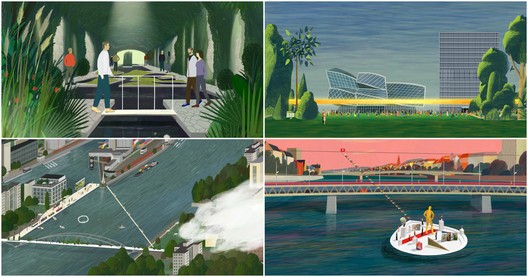