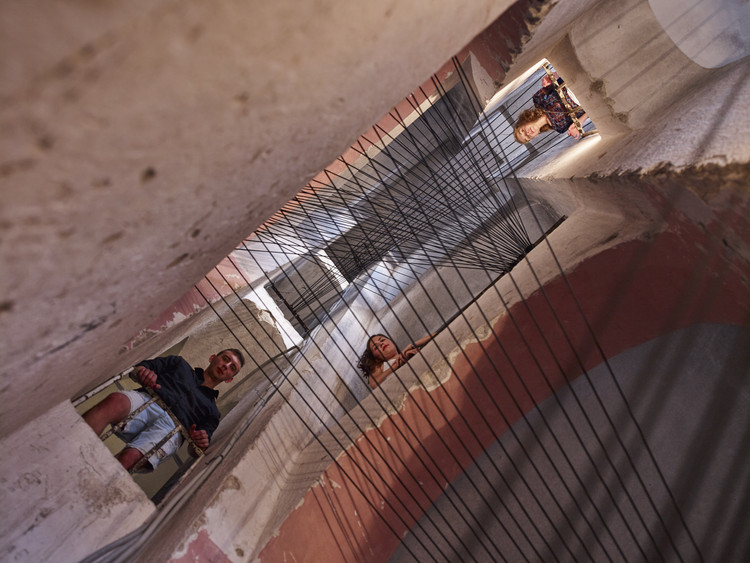 Located in an abandoned, part-derelict prison built during the occupation of the Austrians, the brief faced by the twenty-six participants this year was simple: to design and build "temporary structures that have to be set-up quickly but can also become part of the public space, part of the community, part of the program, and a point of interest for visitors and tourists." The primary material: rope, produced locally; the mentor: Nikola Radeljković of Numen / For Use.

"150 lines of the rope project the bars of 6 prison-cell windows onto the wall they are facing. From each window, there are 25 lines coming from each window connecting outside into a single spot and in this way joining otherwise isolated prison cells. The geometry of the installation is sharp and precise in contrast to the surrounding ruined space and the greenery. These lines symbolize the beams of light and thoughts from the cells as they extend and interconnect these six spaces into the outer space but not for long as they find the wall just outside."

"The intervention measures and experiments with the different views while moving up through the stairs. It freezes the interaction between the human and the complex space of the staircase. Leading to the hidden garden behind the prison, it introduces the spaces throughout the building."

"The concept of Agora is based on the analysis of the inner structure hierarchy and the process of the fabrication of the rope, resulting with an eight yarns structure. It starts with the woven eight-yarn rope and the knots are gradually expanding as they move away from the anchor point. The big rope opens up to form the space provoking and marking the general assembly - the agora. A place of congregation, gathering place or an assembly; central public space in ancient Greek city-states."

How Deep is Your Love

"A single rope represents a single person, every single prisoner. The twisting of a single rope results in an amorphous mass, a brain of the prisoner, his distorted. But it also can be a sea creature, floating in the sea or a plant, rooted in the prison."

"There is one work stuck between the prison and the church of St. Paul. Starting from the ancient well, the existing central cylindrical element in the space, different directional planes are constructed line by line by combination of a multitude of points that become crucial elements of the entire radial composition."

"It has been inspired by an endless flow of triangular geometry within a defined space. The micro-location of the structure (small courtyard against the side-wall of the prison with high walls surrounding it) is hardly definable while the rope structure that drowns into this space appears as a contrast. The linear matrix of the installation dominates the vertical opening. Viewer is invited to approach the structure in vertical directions from two points: street level and the upper level – prison’s terrace."

"Scope focuses on the spatial relationship between the inside of the prison walls and the spaces that define the outside. Despite their proximity, “the outside” remains a distant longing, exacerbated by the permanence of the steel bars that veil the window openings, and the physical dimensions of the fenestrations that restrict views to the Kotor sky. Observing the linearity of internal perspectives within the prison, particularly the walled views out of the cell windows, Scope aims to allude to an expression of freedom by bending the perspective of the prisoners view towards the sky."