Save
This Accurate, Augmented Reality Virtual Ruler Is Pretty Impressive
Share
Or
Copy

Not many people would consider augmented reality particularly useful; it makes for fun dog selfies and other filtered images. But our tunes will probably change with the release of AR Measure™, an app that turns your phone into an accurate ruler. Using augmented reality, the app can calculate distances in 3D spaces captured with your phone's camera.

Created by Laan Labs, the same company who brought us FaceSwap, the app is developed on top of Apple's ARKit framework. How does it work, you ask?

With ARKit, iPhone and iPad can analyze the scene presented by the camera view and find horizontal planes in the room. ARKit can detect horizontal planes like tables and floors, and can track and place objects on smaller feature points as well. – Apple

Compatible iPhones and iPads require Apple's A9 or A10 processors, meaning you will need an iPhone 6S or later model of iPhone, or an iPad Pro if you want the app on a tablet. Though not available yet, the app will be released in the fall when Apple launches its new OS. However, you can sign up to be considered for beta access at AR Measure™ or to be notified once the app is finally available at http://armeasure.com/. 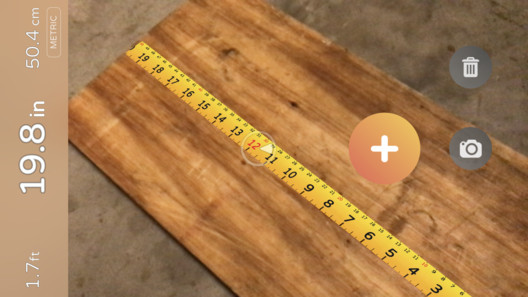