Save
"Parthenon of Books" Constructed from 100,000 Banned Books Rises at Nazi Book Burning Site in Germany
Share
Or
Copy

Argentine artist Marta Minujín has created a full-scale replica of one of the world’s most famous structures, the Parthenon in Athens, constructed out of censored books as a symbol of resistance to political repression. Currently on display at the Documenta 14 art festival in Kassel, Germany, the 100,000 books that make up the monument have been sourced entirely from donations, allowing people from all over the world to contribute titles they feel a personal connection to.

Collaborating with students from Kassel University, Minujín selected more than 170 titles banned in various countries across the world. These books were then strapped to the steel structure with plastic sheeting, protecting them from the elements and allowing sunlight to filter through the building.

According to the artist, the shape of the Parthenon was chosen because it symbolizes “the aesthetic and political ideals of the world’s first democracy.” Its relevance extends also to the site, on Friedrichsplatz in Kassel, where some two thousand books were burned during the Nazi-led “Aktion wider den undeutschen Geist” (Campaign against the Un-German Spirit).

The project was inspired by an earlier installation titled El Partenón de libros, which was constructed in 1983 after the collapse of the civilian-military dictatorship in Argentina. The installation aimed to celebrate the newfound intellectual and democratic freedom by presenting the very books that had been banned by the ruling junta. After five days of exhibition, the building was gently tipped to the side using two cranes, allowing visitors to remove the books and take them home. The contemporary interpretation in Germany will also recirculate its books following the end of Documenta 14.

Learn more about The Parthenon of Books, here. 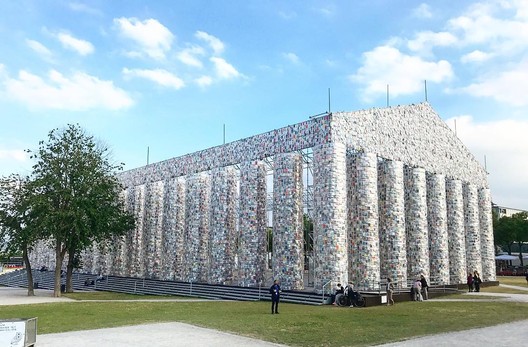