Save
Cabin at Longbranch / Olson Kundig 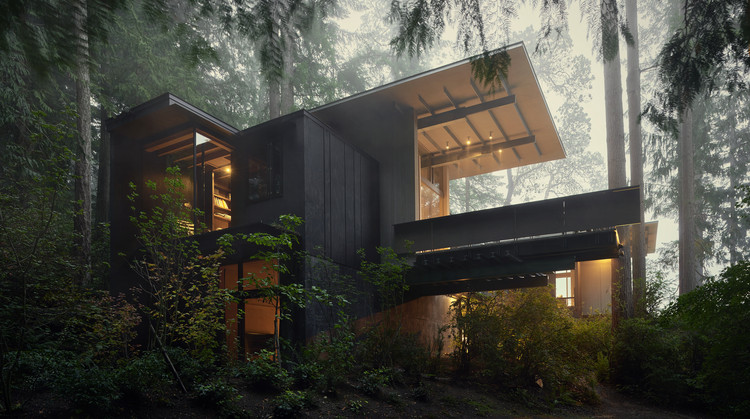 Text description provided by the architects. Jim Olson’s reverence for nature and admiration of the site’s beauty is expressed in the design of his cabin located on Puget Sound and nestled amidst the towering fir trees of an ancient forest. What began as a 200-square- foot bunkhouse built in 1959 has morphed through subsequent remodels (in 1981, 1997, 2003 and 2014) into a modest weekend house. Each successive addition and remodel has reused and integrated the previous structure rather than erasing it, revealing the history of the architecture and the process of its evolution.

In the 1980s, the retreat consisted of three tiny pavilions linked by wooden platforms. In 2003, the pavilions were connected by a unifying roof, creating a single form grounded nto the hillside and projecting out over the landscape. The living room’s large wall of glass frames a view of the adjoining grassy field and Puget Sound, visually blending the indoors and outdoors. In 2014, a master bedroom and two guest rooms were added, creating a retreat of 2,400 square feet.

The cabin is intentionally subdued in color and texture, allowing the lush natural surroundings to take precedence. Simple, readily available materials are used: wood-framed walls are sheathed in plywood or recycled boards, inside and outside; doubled pairs of steel columns support beams that in turn support exposed roof structures. Interior spaces appear to flow seamlessly to the outside as materials continue from inside to out through invisible sheets of glass. Three mature fir trees have been accommodated within the design and allowed to grow through openings in the deck, one of them exiting through an opening in the roof. 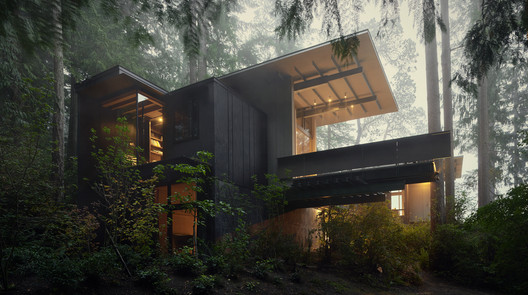