As Mies van der Rohe’s adopted city, Chicago and its surrounding area are home to more of the Modernist architect’s projects than anywhere else in the world, from Crown Hall to Federal Center to the Farnsworth House. Perhaps for that very reason, the McCormick House, located in the Chicago suburb of Elmhurst, is one of the lesser known projects in the architect's’ oeuvre – despite being one of just three single-family homes in the United States completed by Mies.

Built in 1952 for Robert McCormick Jr. – the owner of the land where Mies' 860-880 N. Lake Shore Drive was constructed – the house was moved down the street in 1994, where it was attached to the newly built Elmhurst Museum of Art via a 15-foot-long corridor. While its relocation allowed the building to remain in good care over the next 23 years, it also obscured the home’s front facade, “camouflaging one of the most prized objects in the museum's collection.”

But that’s all about to change, thanks to an upcoming restoration that will remove the offending corridor, allowing the original architecture to shine once again.

Unlike the custom, site-specific Farnsworth House, the McCormick house was envisioned as a prototype for the suburban home, repurposing details first designed for 860-880 N. Lake Shore Drive for a single-family setting. The restoration project will highlight these elements, as the house will again be able to be approached from its original entrance. The original carport will be reconstructed, and complementary landscaping will replace existing hardscaped areas. Previously used as the museum’s administrative wing, the restored house will be transformed into flexible exhibition space.

Led by Elmhurst-based Heritage Architecture Studio and Berglund Construction, the project is estimated to cost between $350,000 to $400,000, and is scheduled to complete later this year.

Check out the video below to learn more about the history of the McCormick House.

One of architecture's greatest tales - the commission of Mies van der Rohe's seminal Farnsworth House - is set to receive the Hollywood treatment. As reported by Showbiz 411's Roger Friedman, the story of the home's construction will be taken on by actors Jeff Bridges (as the architect) and Maggie Gyllenhaal (as Dr. Edith Farnsworth), who last teamed up for 2009's acclaimed Crazy Heart.

Ludwig Mies van der Rohe (27 March 1886 - 17 August 1969) is one of the most influential architects of the 20th century, known for his role in the development of the most enduring architectural style of the era: modernism. 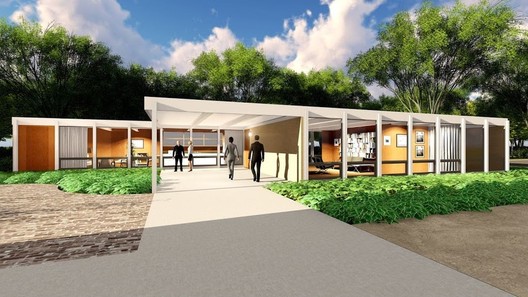