This article originally appeared on guggenheim.org/blogs under the title "Wright’s Living Organism: The Evolution of the Guggenheim Museum," and is used with permission.

Standing on the Solomon R. Guggenheim Museum construction site in 1957, architect Frank Lloyd Wright proclaimed, “It is all one thing, all an integral, not part upon part. This is the principle I’ve always worked toward.” The “principle” that Wright referred to is the design ideology that he developed over the course of his seventy-year career: organic architecture. At its core, that principle was an aspiration for spatial continuity, in which every element of a building would be conceived not as a discretely designed module, but as a constituent of the whole.

Although not Wright’s intention per se, it is fitting that the building he conceived of as a living organism has evolved over time. The overall integrity and character-defining spiral form have remained unchanged, but there have been a series of additions and renovations necessitated by the growth and modernization of the institution.

The grand ramp within the Guggenheim Museum is often compared to a street winding up the rotunda, but when the museum opened, traffic literally drove through the building: entering on Fifth Avenue, continuing on a sweeping curved driveway, and exiting onto 89th street. Wright was infatuated with automobiles, believing that the choice and control that an automobile provides to individuals embodies democracy. After receiving the commission for the Guggenheim Museum in 1943 from Hilla Rebay (the museum’s founding director, 1939 – 1949), Wright pushed for a site in Riverdale Park in the Bronx. Unconcerned with the remote nature of the site, he was convinced that automobile and even helicopter travel would become universal after the war. He wrote to Rebay, “The sidewalk crowd means less than nothing to our enterprise.”

After refocusing on a site within Manhattan’s grid, Wright’s early sketches of the museum resolutely included a driveway and parking spaces; there were even cars in his 1945 model. In the end, the parking spaces were substituted with an outdoor sculpture park, but the driveway was fully functional until 1975. At that time, both driveway and park were enclosed, creating the space for essential museum functions: a bookstore, restaurant, and service entrance.

The driveway had cut underneath what was initially conceived of as an administrative building, which Wright dubbed the “Monitor.” In the earliest schemes, this structure housed apartments for founder Solomon R. Guggenheim and Rebay. On December 10, 1958, Wright described the Monitor as, “A feature intended for the use of the operating personnel of the museum and for the amenities of people who man it day by day and operate it, as well as for the trustees of the museum themselves and their friends. A place, therefore, for social occasions and propaganda.”

A boardroom for the trustees and a library, along with offices and other workspaces, are all detailed in the 1958 construction drawing set. These documents show the spaces furnished with custom tables and chairs that were designed to hug the curves of the building. Ultimately, that furniture was never built, and standard rectangular desks were awkwardly positioned in the space. Just four years after the building opened, in 1963, the second floor of the monitor was converted into a gallery space, now known as the Thannhauser Gallery. The rest of the Monitor was modified over time, and today the structure houses a gift shop on the ground floor, and gallery spaces on Levels 2 and 4. The latest transformation, as of the summer of 2016: Level 3 is now completely dedicated to the museum’s cafe.

One of the most conspicuous changes to the building is widely unknown: the evolution of the exterior paint color. When the museum opened on October 21, 1959, the exterior was closer in color to the terrazzo floors within: a warm yellow-brown. Wright enthusiasts will find this hue reminiscent of his other concrete structures, including the Price Tower in Bartlesville, Oklahoma (1956) and the terraces of Fallingwater (1939).

The thought process behind selecting the buff paint for the facade fell within the principles of organic architecture—deliberately aligning the exterior facade with the terrazzo floors within gave an impression of a single, smooth continuous space. In fact, to underscore the continuity of the building, Wright intended that every surface be a consistent color. When James Johnson Sweeney (the museum’s director from 1952 – 1960) insisted that the interior gallery walls be painted white, Wright wrote in protest to Harry Guggenheim, Solomon’s nephew:

This type of structure has no inside independent of the outside as one flows into and is of the other. Integrity is gone if these are separated and you have the conventional building of yesteryear. The features of this new structure are seen coming inside as well as the inside features going outside. This integration yields a nobility of quality and the strength of simplicity—a truth of which our culture has yet seen little and James has seen none... To thus tear the inside from the outside of the memorial would cheapen its character by actually destroying the virtue and beauty of the building.

Wright lost that battle, but the selection of the exterior paint color was his choice alone to make. That said, the building was only the original buff for five years. A series of paint jobs over the subsequent decades slowly transformed the museum into what most think of as an off-white building (it’s actually light gray, specifically Tnemec BF72 Platinum). In 2007, after a thorough analysis that involved uncovering up to 12 layers of paint over the concrete form, the New York City Landmarks Commission designated in perpetuity a single paint color. They decided on cool, light gray, the color that is most commonly associated with the building, as opposed to dramatically reinstating Wright’s buff.

Over the years, as the building has been renovated and expanded, Wright’s intention has been consulted and challenged. His design for the museum developed over 16 years, from its commission in 1943 until the building opened in 1959. Changes were even made during the three-years construction period. Wright’s vision is relative to context and circumstance, and the historical significance of the structure has developed over time. Acknowledging the legitimacy of the layered, flexible authenticity of the Guggenheim Museum recognizes the structure as a living organism. 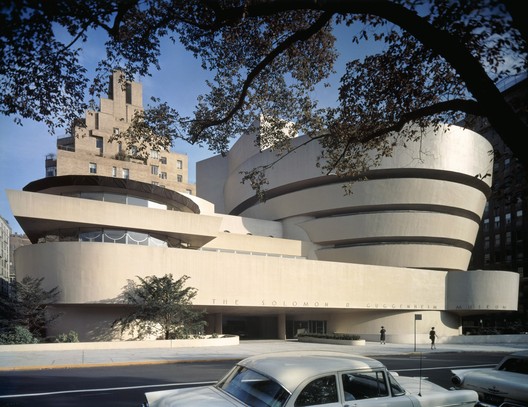