As part of the second Bamboo Biennale held in October 2016, the city of Solo in Central Java received a public Bamboo Bridge courtesy of Indonesian Architects Without Borders (ASF-ID). Connecting the Pasar Gede market and colonial Dutch Vastenburg Fort, the 18-meter bamboo structure offers a revitalization of river life in the historic Indonesian city. Spanning across the Kali Pepe river, residents of Java can traverse the pedestrian bridge on its track that varies in width from 1.8 to 2.3 meters. 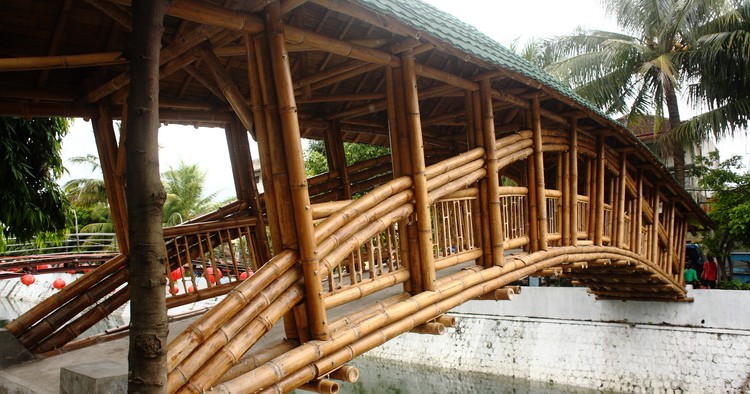 Integral to the project was the introduction of bamboo as a viable material for public infrastructure. As part of the initial design process, scale models were tested in the engineering lab at the Parahyangan Catholic University. From there, carpenters from Yogyakarta led the construction and assembly of the bridge between October and December. Also important to the success of the project was the support of the adjacent community of Kampung Ketandan, who provided lodging for the builders and volunteers.

Assembled in a parking lot, the main arches of the bridge are a result of large bamboo poles cut at regular intervals and secured together with galvanized steel bolts. Mobile cranes were then used to place them on to the foundations. Vertical supports at regular intervals accompany the arches to provide extra support to the roof structure. To prolong the longevity of the bridge, the floor is made of reinforced concrete and its roof has eaves to protect the pest-treated petung bamboo from seasonal tropical rains.

Description from the Architects: In the context of promoting bamboo as a promising material for the future, the bridge is showcasing the value of the material for a public facility within cities.

Due to its structural properties and fast growth, bamboo is expanding in popularity as a sustainable building material. A main goal of the architects was to exemplify the constructive possibilities of the plant, known for its tensile strength and flexibility. Although abundant in Indonesia, bamboo is most often considered a secondary construction material. As the developing world cultivates a language for sustainable architecture, bamboo infrastructure projects such this first-of-its-kind bridge will become increasingly important points of reference. 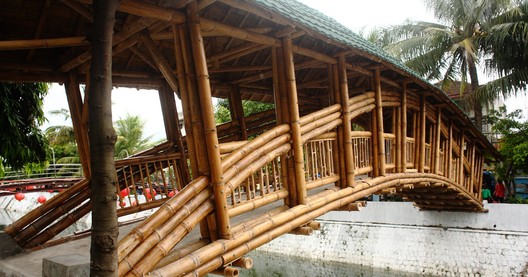