From wonderment to disgust, the opening of Solomon R. Guggenheim Museum by Frank Lloyd Wright in 1959 was met with a wide range of reactions from the public. This profound cultural moment was distilled in a series of witty cartoons published in the New Yorker that simultaneously lampooned both the innovative architecture and its critics, which were recently shared in a blog post by the Guggenheim Museum. Through detailed sketches, cartoonist Alan Dunn represents the experience of the building, from staring into the exterior porthole windows to walking around the grand ramp. In one drawing he depicts the perspective from the first floor looking up at the dome, giving a sweeping sense of the curvature and geometries of the building.

In addition to showing the architecture, Dunn includes dialogue from the museum guests that hints at their astonishment or skepticism about the building. The quips bring a sense of humor to the cartoons along with honest observations: vignettes such as the man peeking around the painting hanging off the curved wall exemplify the disorientation that some viewers felt. Through Dunn’s cartoons of the Guggenheim, he reminds us of the timeless combination of excitement and hesitance that comes with first encountering unprecedented works of architecture.

To learn more about the New Yorker’s Guggenheim cartoon and see more of the original drawings, read the original article by Caitlin Dover here. 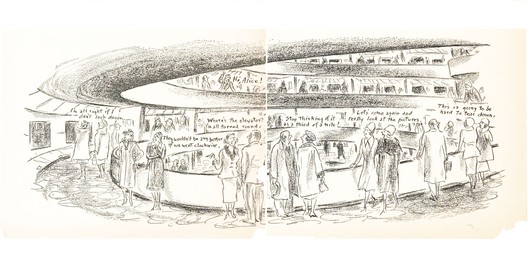