It's no secret that Frank Lloyd Wright was among the architecture profession's more colorful characters. Known as an outspoken and often unforgiving egotist, Wright's appreciation of architecture was outshone only by his appreciation for himself—which is perhaps understandable, given that he ranks among the 20th century's great geniuses. For better or worse (probably worse), Wright's reputation has clung to the profession, thanks in large part to Ayn Rand, who used Wright as inspiration for the incorrigible lead character of one of her most famous books, The Fountainhead.

But in truth, most architects have at least a little of Frank Lloyd Wright's personality contained within their own. It's difficult to have self-confidence without a shred of ego, and since design requires a lot of self-confidence, many of us can relate—if only occasionally—to the outrageous attitude of The United States' greatest architect. In honor of Frank Lloyd Wright's 150th birthday today, we've collected some of Wright's most "insightful" comments and turned them into posters that can inspire you no matter what life throws at you. Now, take your humility, lock it in a tiny box deep inside your mind, and join us on a journey through 150 years of wisdom...

When You Really Want to Respond with “SMH”

When Addressing Someone Who Doubted Your Architectural Acuity

When You Don’t/Didn’t Get Into the GSD

When You’re Sexy and You Know It

When Your Insufferable Colleagues Don't Understand Your Genius

Right After You Graduate

When Your Sub-Contractors Aren't Good Enough for You

When You Need to Explain Yourself to Someone 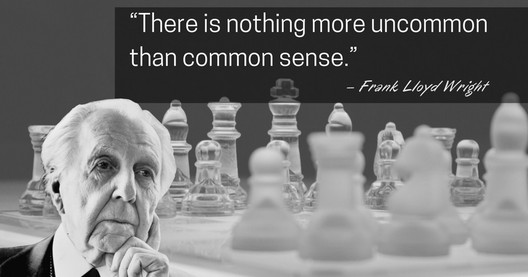