A new train station in Cambridge is getting a lot of attention from a surprising audience: mathematicians. Cambridge North Station is clad in aluminum panels with a geometrical cutout design. The architecture firm, Atkins, originally claimed that the pattern was derived from Cambridge alumnus John Conway’s “Game of Life,” but eagle-eyed mathematicians soon realized that was incorrect. As the above video points out, the design is in fact based on a mathematical rule studied by Stephen Wolfram, an Oxford alumnus, much to the dismay of rival university Cambridge. Though the firm’s website still references Conway, a Senior Architectural Designer at Atkins, Quintin Doyle, has since confirmed that it was, in fact, Wolfram’s Rule 30 that they used in the design.

Aside from its mathematical façade, which transforms the building’s appearance from night to day—for the technically-minded, the pattern shown conforms to Wolfram's rule 135 in the day, while at night the interior lights invert the pattern to rule 30—the station also features an abundance of daylight throughout its open interior. Atkins designed the natural lighting to also serve a wayfinding purpose by lighting key areas of the station. The aluminum panels that make up the façade also provide passive security to ground floor glazed areas. The station is expected to serve over 3,000 passengers per day, providing access to several major new developments to the north of Cambridge while alleviating congestion from the city center.

For those interested in knowing more about the mathematical rules used to create the facade, this blog post by Stephen Wolfram himself (who seems rather flattered by the design) describes the pattern in depth. Or, for those who just want to play about and create more facade panel designs based on Wolfram's rules, the mathematician has also created an automaton panel generator based on the process used by Atkins. 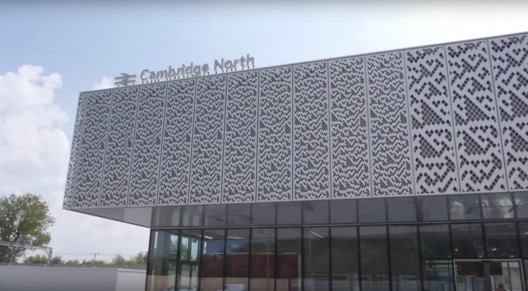