The project began as a design by Ole Scheeren for local firm Pace Development, and was completed by his own firm following his departure from OMA in 2010. The architects describe the project:

The design of MahaNakhon dismantles the typical tower and podium typology, creating a skyscraper that melds with the city by gradually ‘dissolving’ as it flows downward to meet the ground. A series of cascading indoor/outdoor terraces at the base of the tower accommodates retail and entertainment facilities, evoking the shifting protrusions of a mountain landscape.

See the full gallery of photos, after the break. 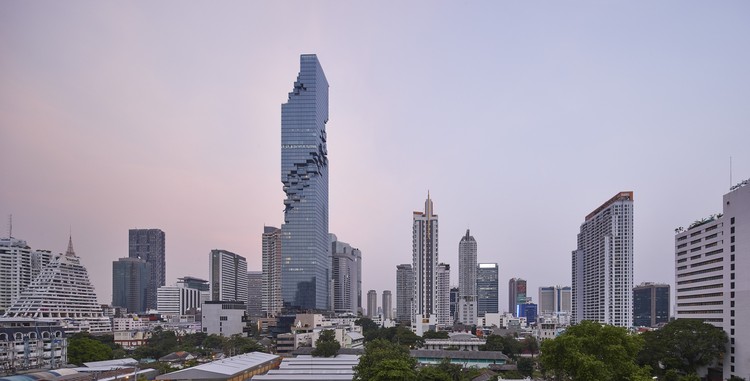 In this video from CNN Style Ole Scheeren, the former OMA partner and founder of Büro Ole Scheeren, discusses his MahaNakhon tower, a luxury mixed used skyscraper that has transformed the Bangkok skyline. MahaNakhon was recognized as the tallest building in Thailand by the Council on Tall Buildings and Urban Habitat (CTBUH) after its light show inauguration earlier this year.

Thailand's new tallest building, MahaNakhon, has opened to the public with a spectacular light show highlighting the pixelated-design of the 314 meter tall building. Designed by Büro Ole Scheeren, the 77-story mixed-use skyscraper contains space for a hotel, retail, bars, restaurants and an observation deck, as well as 200 condominium units managed by Ritz-Carlton Residences with unparalleled views out onto the Bangkok skyline and beyond. 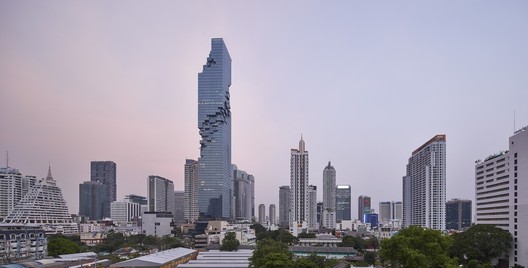