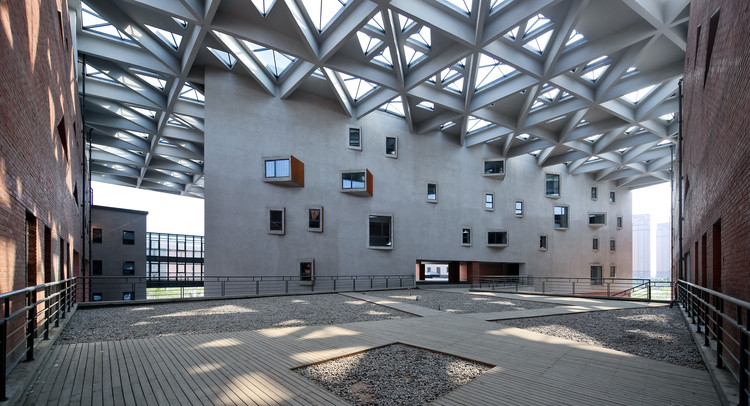 Text description provided by the architects. Located on the Hunnan New Campus of Northeastern University in Shenyang, this project is a teaching building of the School of Architecture, School of Creative Culture, and School of International Exchange. Adopting a rigorous axisymmetric layout, the campus planning is designed by a Japanese design firm.

As one of the four major groups of schools in the central area, the project is subject to the stringent control of campus planning which requires that each of the four major groups of schools be composed of three square buildings with courtyards to form a pattern that looks like the Chinese character “品.” In the first phase of construction two square buildings will be built near the central axis, one being four stories high and the other being six stories high. The facades facing the central axis and school gate must be aligned with the line and built of red bricks to inherit the traditional style of the old campus.

Being School of Liberal Arts, an open and shared space is needed particularly. Restricted by the rigorous and meticulous campus planning, how to achieve variety within limits is a challenge for us.

Our strategy is to “Separate Façade from Volume,” i.e., to treat facades, which are strictly controlled by the planning, as independent elements and separate them from the volume of the building. Such separation creates the chance for change and brings on a clear logic by which the facade and the volume play their respective role: the facade functions to meet the demand for a uniform campus image while the volume is liberated from the restrictions to create an open and free environment.

After the volume becomes autonomous, we turn the north volume by a certain degree to form two interesting wedge-shaped grey spaces between volume and facade. At the same time, this also separates the two square volumes from each other that originally should have engaged with each other, so as to form a walk path between them. This path is another important consideration in our design. In the initial design stage, we comprehensively analyzed the pedestrian traffic of the campus: a subway station will be built outside the north gate of the campus, and the southwest corner of the campus is the living quarters of students, so there will be a large amount of pedestrian traffic between the two points in the future. In view of this, we wish to provide a short cut between them, which will not only facilitate traffic but also create the possibility of cultural exchange and collision for students from different schools.

Since the building is to be constructed in Shenyang which is a typical cold area, how to increase the vitality of outdoor space is another challenge for us. We shelter the grey space with a roof full of triangular skylights, which not only keeps out rain and snow but also provides interesting light and shadows. One of the wedge-shaped gray space between the two volumes is part of the walk path; the other is to the north and precisely fits the big, medium, and small workshops of the School of Creative Culture. The roofs of the three workshops constitute a terraced platform which can serve as an outdoor space for exhibiting the works of teachers and students. As for the treatment of inner-yard space, we set the big lecture hall on the first floor of the 6-story courtyard building and lift the activity platform up to the roof, which reduces the depth of the courtyard and increases day lighting. In addition, the courtyard communicates with the highest terrace via a path that runs from the inner yard, through the terraced platform, to the ground. This way, the vitality of outdoor space is maximized.

With respect to facade language and material selection, we seek novelty while retaining conservative. As for the facade separated from the volume, we extract the most classic elements of the College of Science and Technology on the old campus and apply them to the new building’s east facade facing the main entrance plaza; the facade is built of red bricks in accordance with the planning to respond to the teachers and students' emotional appeal for the old campus. For the façades of volumes themselves, the pedestal is also built of red bricks to form a certain association, while other parts are dominated by functional windows and painted white to achieve a modern look. Spaces with lower day-lighting requirements adopt triangle bay-windows which, lively in style, serve as display windows and places for rest.

An open building with walking-through path, integrated with the rigorous campus planning while remaining its inner variety, this is the solution we try to give this time. 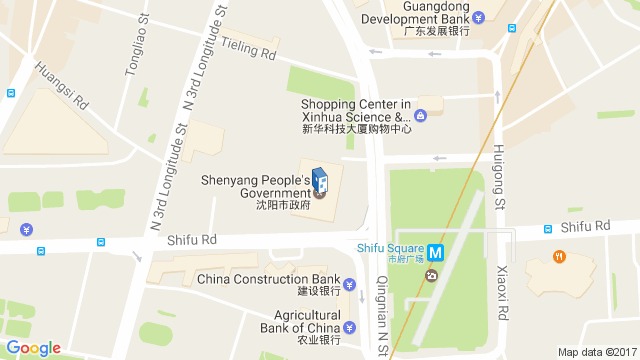 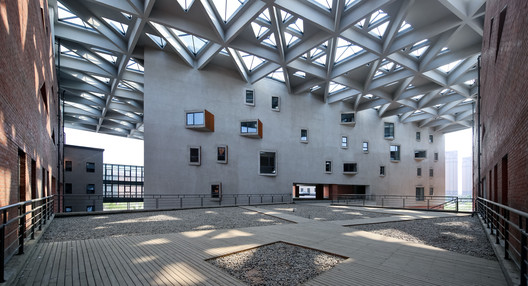