Save
The Breakneck Evolution of Chinese Metro Systems

As Peter Dovak, creator of "The Evolution of China's Metro Systems" graphic explains,

Growth was modest for many years, but has become exponentially more rapid over time and now dwarfs the rest of the world's progress. In just the thirty years from 1990 to 2020, the number of cities with a metro system will grow from those original three to over forty—with more to come soon after. [1]

Dovak has also created graphics that show the evolution of Beijing and Shanghai's systems, now the world's two largest in both length and annual ridership. [2]

Earlier this month we pulished Peter Dovak's illustrations series of "Mini Metros." The graphic of Chinese metro systems is a continuation of that project. Visit Dovak's site to see more.

American graphic designer Peter Dovak is passionate about urban transportation. He has creates colorful designs that represent transit systems in a much more instructive way so that people can interpret them more easily. One of his last projects, called 220 Mini Metros, was based on metro and light rail networks from 220 cities of the world. 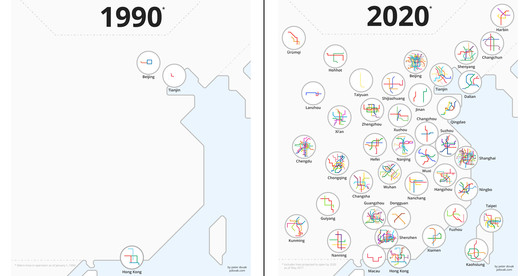