Save
Biking Through Denmark: Highlights of Copenhagen's Architecture Festival
Share
Or
Copy

This year's Copenhagen Architecture Festival (CAFx) offered a wide range of activities, from film screenings to exhibitions on the future of social housing. The festival's fourth edition took place over 11 days and featured more than 150 architectural events in Copenhagen, Aarhus, and Aalborg.

Festival Director Josephine Michau explained that since its first edition, the intention behind CAFx was to bring many local agents together in order to build new dialogues around architecture. As a society, how do we identify with architecture? What values do we ascribe to it? These questions were part of this edition's overarching theme: "Architecture as identity."

Four main events marked the festival: the world premiere of ’BIG TIME’ - a new portrait film about architect Bjarke Ingels, a major international conference with visiting architects Charles Renfro and Barozzi Veiga, an exhibition titled "Never Demolish" which presented the transformation of the Cité du Grand Parc in Bordeaux, and bike tours around Copenhagen and Aarhus with the city architects.

Tina Saaby, Copenhagen's city architect, offered a bike tour through some of the city's landmarks - including the new controversial Inner harbor Bridge - stopping to explain the reasoning behind the measures that were taken in order to make Copenhagen the world's best city for cyclists. In Aarhus, the bike tour stops included Arne Jacobsen's Aarhus City Hall as well as the ARoS Art Museum, which will open its new expansion project to the public in 2020.

This year, CAFx partnered with the KADK’s School of Architecture to host a summer course under the title “Landscape as Character," focusing on the temporal nature and character of the Danish landscape. The deadline for application is June 1st. For more information, click here. 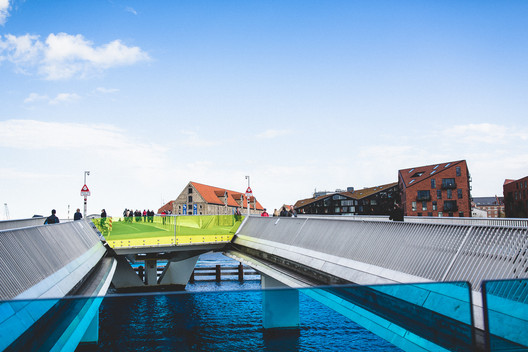