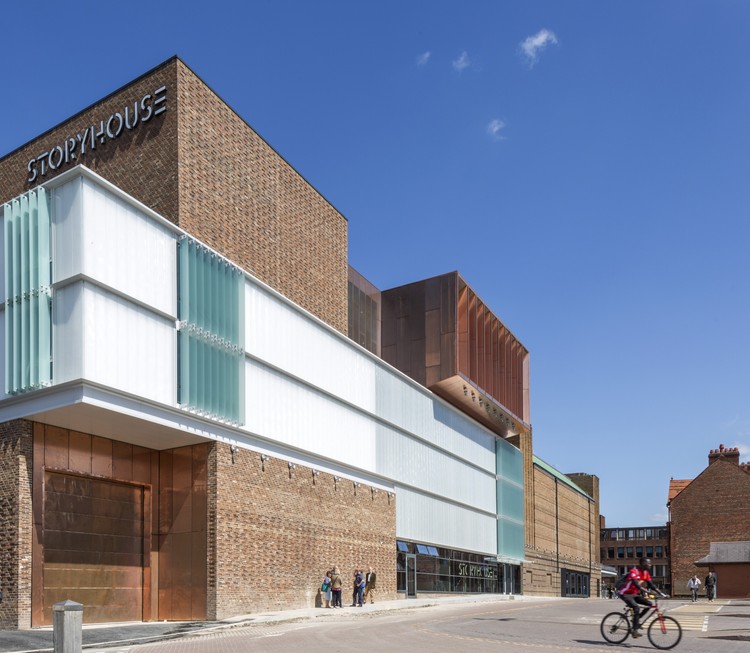 Text description provided by the architects. Storyhouse includes a large main theatre space with a 20m high flytower and up to 800 seats, a 150-seat studio with a dedicated bar, a 100-seat boutique cinema and a city library with over 700m of shelving throughout the building. These functions are supported by a large foyer and café, and large backstage with dressing rooms and company facilities.

When the team first visited the site in 2012 it was clear that externally the 1936 Odeon was well-preserved. The largely blank volume of the main cinema space is articulated with a composition of horizontal and vertical brick patterning emphasizing corner-towers and a rusticated base. A further brick tower and cantilevered canopy mark the entrance and the whole composition is grounded to street-scale by a matching row of shop units. Inside, the main cinema volume had been crudely sub-divided into ve screens and many original features had been removed. Stripping out these sub-divisions and the redundant balcony structure revealed an enormous internal volume which retains much of its original streamlined art deco plasterwork. The plasterwork ceiling and wall features form a series of curving planes and pro les which trace the complex geometry of the room and lead the eye down to the screen itself.

With the seats removed and floor leveled, the main Odeon volume has become the focal point of the new cultural centre, containing the main café and bar at ground level and at its centre the new 100-seat cinema screen. The cinema is a distinct object clad in back-lit cast glass and accessed from a new mezzanine level which also provides book-lined library study space and foyer circulation. The curved shape of the mezzanine edge follows that of the former cinema balcony, revealing the full scale of the proscenium plasterwork which once surrounded the former Odeon’s screen. With the screen removed, the foyer space now continues right through the old proscenium opening to reveal the brick-clad main auditorium of the new-build theatre. Red-painted steel stairs and walkways giving access to the theatre and the studio theatre above are suspended like theatre scenery in the glazed gap between the old and new buildings.

The new extension containing the theatre and studio has a similar footprint to the existing Odeon, but the main theatre’s tower, and the elevated volume of the studio theatre result in greater overall height. The extension is conceived as a companion-piece to the Odeon, the main auditorium and flytower volume which form the armature of the extension are clad in brick, diagonally bonded and textured to express its non-loadbearing status, and created from a brick blend selected to complement the existing Odeon’s facades. Steel-framed audience circulation walkways flank the brick auditorium enclosed by glazed cladding which wraps the entire extension building to the height of the existing Odeon, punctured only by the brick flytower and copper-clad studio volume which appears to sit on the theatre’s roof as a separate block.

The main theatre itself is designed to operate as an 800- seat theatre with a programme of touring productions for some of the year, but is recon figurable to a 500- seat thrust-stage for locally produced work during the festival season. Acoustically isolated from the main theatre, the 150-seat studio sits on a series of steel transfer beams and columns which visibly extend down to the ground on either side of the brick auditorium volume. The studio has a dedicated bar with a fully- glazed façade to the south giving panoramic views over the city of Chester.

The city’s new public library is completely integrated into the scheme. Books will be accessible in all the key spaces within the historic Odeon, including the café/ restaurant and circulation areas. The row of shop units which were part of the original Odeon development now house a dedicated children’s library with a story- telling space, and quiet study spaces for adult readers.

With its day-long programme of events and activities the building presents the opportunity to attract the broadest possible audience from Chester and beyond, helping to revitalise the city and at the same time to re- invent the role of civic cultural buildings in the twenty- first century. 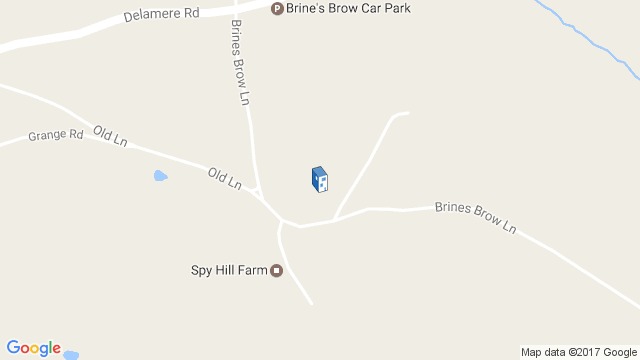 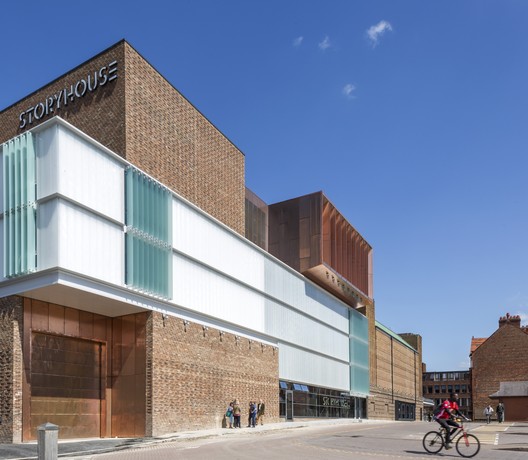