A vibrant pavilion has arrived to grace the boardwalks of California’s Santa Barbara waterfront. The pavilion entitled Runaway has been designed by SPORTS, an architecture and design collaboration of Greg Corso and Molly Hunker, recently selected as one of the Architectural League of New York’s emerging young practices for 2017. Blending a bright, colorful character with functional modernity, Runaway was installed on the Waterfront of Santa Barbara in March 2017, one of several locations the pavilion will travel to throughout the year. 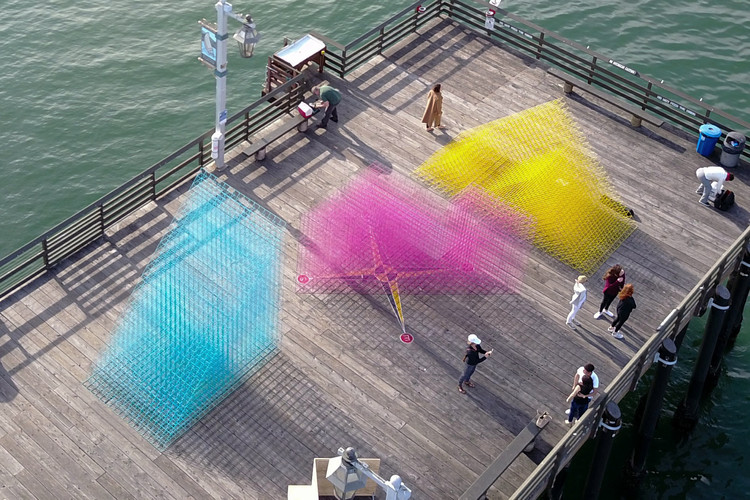 Runaway was selected as the winning design for the Museum of Contemporary Art Santa Barbara (MCASB) International Pavilion Competition, inspired by similar initiatives such as the Serpentine Pavilions in London and the MoMA PS1’s Young Architects Program in New York. Runaway represents the first element of ‘takepart I makeart: taking art outdoors’, an initiative launched by the MCASB in 2017. For winning the competition, SPORTS received a $5000 reward and an additional $45,000 to support the project.

A matrix of thin steel rods, Runaway features three vibrant, modular objects which can be freely orientated to adapt to different locations and uses. The pavilion invites communities to view and interact with their surroundings in a new light – encouraging residents and artists alike to consider how contemporary art can activate public space. In reference to the ever-changing light and fog of Santa Barbara, Hunker explains how Runaway “emphasizes a vibrantly saturated visual environment that aims at architecturalizing the blurry or hazy aesthetic qualities of the air of Santa Barbara."

SPORTS’ design is emblematic of bold, innovative thinking that can both challenge and produce rich dialogue with the traditional, California Mission style aesthetic that typically characterizes Santa Barbara. I love the way that Runaway’s design draws upon the history of California’s Light & Space movement to call into question current issues of visibility within Santa Barbara’s communities - Miki Garcia, MCASB Executive Director.

You can learn more about Runaway from the architect's website here. 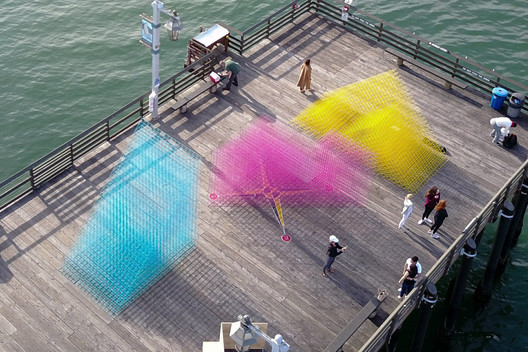