The winners of the 2017 Land Art Competition have been announced, with submissions responding to the challenge of creating site-specific installations in rural Ghana, as part of a larger initiative to enrich the Abetenim Arts Village. The aim was to complement the village’s learning center with other creative spaces for communal living and working, thus “creating a truly unique experience that becomes emblematic of what an art village is and how it needs to function as a place.”

Selected entries will also have the opportunity to be fully realized onsite, through various land art workshops held by the Nka Foundation over the course of the next two years. Here are the winning entries:

The Earth Archive Project is an artifact, a monument, made from compact formed mud beams. The proposal is to elevate the earth with the earth by the earth and its people. The project seeks to establish, to create, on Abetenim site, a new marker to cross on the planet, a new geographic coordinate to visit…to pass. A testimony of time, another same single place…and the silence.

Earth Archive Project is also an architecture, a passage that reaching the point zero of the meridian and equator cross. This direction reveals a dimension of land to the project as a collective information. Earth Archive Project is also about to store, to show, to sublime the local ground as a history, a treasure, more, a heritage to care and observe with respect as a “mud demonstration:, a silent and peaceful elevation of matter. A waiting material in its initial context. A product to be simply admired.

The Time is obviously but strongly connected to Earth Archive Project, it is the factor of durability and visibility for the next visitors to come on the site. It’s just like a passage from now to the future. This project does not conduct a vanishing or ephemeral purpose either, not promote any ideology or dogma. It’s a conceptual way of displacement both of earth and humans together. This is a land art project using the context of the site location and information.

The main source of the design origin is the local traditional pattern (“Strength” and “Energy”) and El Anatsui’ art works. The contrast of the inside and outside of the space hinted the gap between ideal and reality. Meanwhile the art space tires to meet some functions: villagers’ leisure and parties, children’s amusement and festival activities. Bamboo, wood, stone, clay, shell, plastic ropes, cocoa pods as raw materials will be used to build the space by primitive and simple process, and the construction cost will be controlled less than 2075 dollars. We try to create a bright, colourful, gameplay space for Ghanaian villagers to participate in.

A rectangular void is dug in the ground. With the removed earth, we propose a wall, roughly the size of a domestic partition, using the construction technique of rammed earth. Often times, land art introduces a foreign entity or removes something from the site creating an aggressive displacement. Here the earth taken is simply put back next to the void vertically as a singular element of architectural delineation, bearing openings of door and windows. One side of the wall is the negative space on the ground, the other side is an array of the cutouts from the wall, creating the Ashanti Domino.

The wall and cutouts are painted in patterns similar to the façade of a gurunsi house. The wall together with the displaced pieces simply provide shade during the day, a ledge to sit on, an appealing graphic to look at, a shelf to place a plant – pleasant but insignificant. The negative space in the earth from which the rammed earth wall is formed is a place of gathering under the shade of the wall.

Then, a glimpse of the wall from a certain angle. The wall and the cutouts at a distance align, and the graphic is made whole. The completed graphic ambiguously recalls that icon of modernism – the maison domino – abstracted, barely evoked. Modernism painted onto Africa, and Africa which inspired that very Modernism and that very author, Le Corbusier, to begin with. In 1956 Ghana declared independence. But what, exactly, is independence? How does one reconcile African and Modern? These questions are rippled in the Ashanti Domino.

Dutch architectural firm, Studio Komma, in collaboration with concept-developer The Men of Foam, have won the Lot 2 Urban Lab Challenge, with their proposal, ZIP2516. Located in The Hague, The Netherlands, in an upcoming living and working district, the project "seeks to create an iconic building that is an accelerator for the transformation of an industrial area into a new energetic urban district." 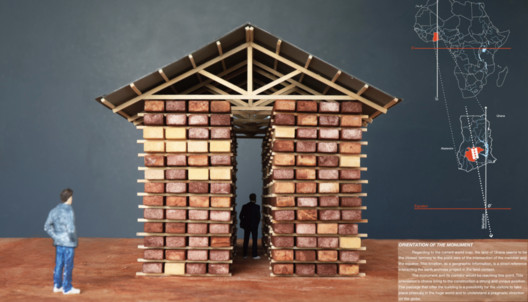