Adjaye Associates have announced the design of a new 50,000 square foot library and event center in Winter Park, Florida, which will serve as a new civic hub and will compliment the nearby Martin Luther King Jr. Park. The $30 million building also includes an 8,500 square foot civic center, combining as a manifestation of the city’s aspirations for library services.

“Winter Park’s vision for this project truly embraces the continued evolution of the library in the 21st century,” said Sir David Adjaye. “With a diverse program that recognizes it as a critical piece of cultural infrastructure, this will be a dynamic space for shared education, recreation, and interaction.”

With a global reputation for its unique approach to libraries and other civic architecture, the firm’s previous work includes two neighborhood libraries in Washington D.C. as well as the acclaimed Idea Stores in Tower Hamlets, London. Adjaye’s most recent endeavor was The National Museum of African-American History and Culture, in addition to his recent knighting in January this year.

“With the team’s incredible talents at work, we are confident that the new library and events center will be one of Winter Park’s premier locations for education, business support, and community collaboration,” said Winter Park Public Library Executive Director Shawn Shaffer.

As the lead design architects, Adjaye Associates will be working in collaboration with HuntonBrady Architects, who will act as the executive architects. Construction on the library is set to begin next month. 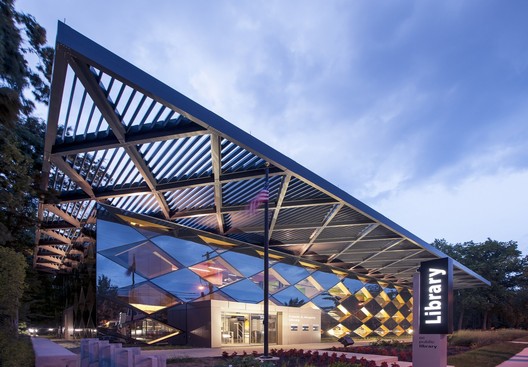