Earlier this year, Dutch company TomTom(TOM2) released a detailed report that uncovered the cities around the world *that have the most traffic congestion, based on the results of the TomTom Traffic Index 2017. According to the latest analysis, Mexico City will retain its crown as the "most traffic congested city" in the world. Drivers in the Mexican capital are expected to spend an average of 66% extra travel time stuck in traffic any time of the day, and up to 101% in the evening rush hours adding a whopping 227 hours of extra travel time per year.

Next in the global rankings are Bangkok (61%), Jakarta (58%), Chongqing (52%) and Bucharest (50%), making up the top five most congested cities in the world. You can find out more about TomTom's Traffic Index and discover where your home city ranks at after the break.

You can find out more about the TomTom Traffic Index, and discover where your home city ranks here. 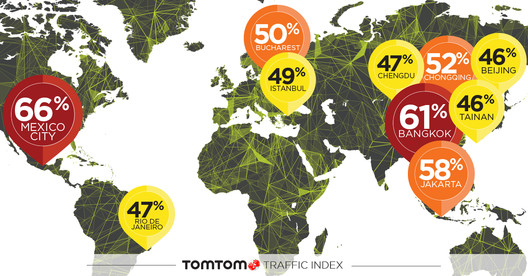