With Melbourne’s contentious elevated rail project starting construction, an independent group has taken the opportunity to critique the way that this key piece of infrastructure is engaging with the public. The project, leftunder, is a platform for alternate, community driven proposals for the public space being made available adjacent to this new infrastructure, that which might normally be overlooked and undermaintained. Run by not-for-profit OFFICE, the project has recently culminated in an exhibition at The National Gallery of Victoria's Design Week.

The leftunder project is aimed at generating a conversation and proposals among community groups and local residents about how they could occupy the 22.5 HA of land being made available below the development of the Sky Rail in Melbourne's south-eastern suburbs. This is not only a critique on current developer driven process in Melbourne and wider Australia but also an alternative to the current community engagement strategies.

The research has identified that there are 1200+ community groups within the suburbs adjacent to the development, all with a strong identity and skill set. The goal of leftunder is to look at how these vibrant communities that are often unseen can be expressed within this soon to be created public space. A number of engagement strategies have been undertaken, the two most prominent of which have been the launch of the leftunder website as an online forum for discussion, where residents submit proposals, these are then translated into axonometric diagrams for the wider community to engage with and comment on.

The second key strategy has been that of the series of information booth installations, culminating in an exhibition of this work as a part of National Gallery of Victoria Design Week.

The exhibition collated a series of nine installations at each of the nine proposed level crossings to be removed by the state government in Melbourne’s eastern suburbs, from Carnegie to Noble Park. The exhibition installation, in the form of an information booth, created a forum for participants, locals, and professionals to view and discuss a range of responses to the occupation of the 22.5 ha of land being created from the elevation of the train line. It highlighted the difference of demographics as the project passes through three councils and the values that these locals hold. 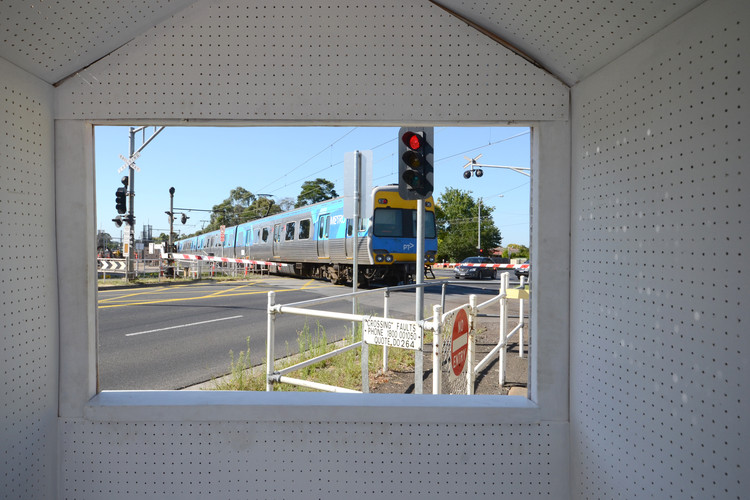 News via: leftunder and OFFICE.