Save
Korean Curiosity: Is Seoul Experiencing a "Neo-Brutalist Revival"?
Share
Or
Copy

During his frequent travels to Seoul, Hong Kong- and Singapore-based photographer Raphael Olivier noticed a new trend taking the South Korean capital: a crop of geometric, concrete buildings of all genres. He calls the new style Neo-Brutalism, after the modernist movement that proliferated in the late 1950s to 1970s, in which raw concrete was meant to express a truth and honesty. Olivier's observation led him to capture the phenomenon in a personal photo series—a photographic treasure trove of these projects which, when taken as a whole, uncovers a cross-section of this trend in the city's architecture. 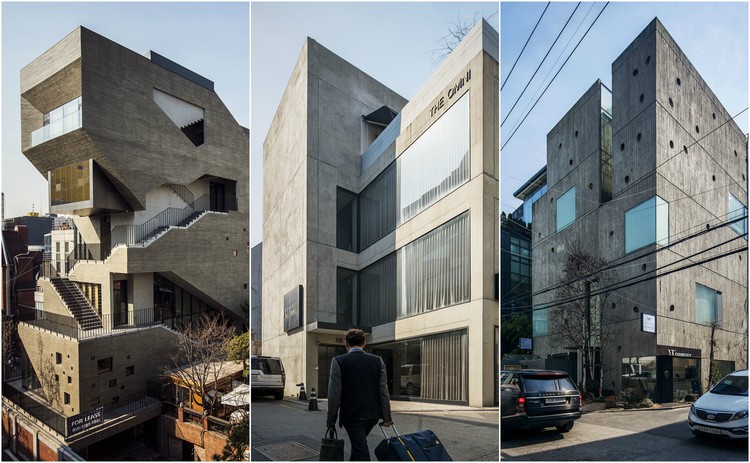 The "Brutalist Revival" has been well documented over the past several years, but the phrase usually refers to a positive shift in our perception of the style, rather than a return to the actual construction of Brutalist buildings. A central part of this movement is the presence of Brutalist buildings on internet sites like Instagram and Tumblr, where dedicated accounts with tens of thousands of followers post photos of both real 20th-century projects and entirely imagined designs. These photos can border on the sensationalist: they often cut off the edges of buildings in a way that makes them lose their scale, or view the buildings from angles that appear looming. Olivier's series departs from this visual vocabulary—in nearly every photo, the entire building is framed in the shot, often with surrounding buildings, cars, and passersby to establish the subject as a living part of an urban fabric.

Yet despite its deviation from the standard style for today's Brutalist photography, the series works in a familiar way. With its square framing and sometimes imperfect shots, Olivier's series feels like (a more determined and informed version of) the documentation and urban exploration of more amateur photographers. The photographer says of the work, "the core motivation of this is just that it’s fun for me to explore an urban environment with an angle, with a specific thing that I’m looking for. So it’s really the process, I think that’s what's interesting to me. The process of finding the spots and getting them at the right time, in good light—basically it's the process of shooting that I find fun." Following one architectural thread through a massively complex and diverse city like Seoul helps to make sense of it.

Olivier's initial recognition of the Neo-Brutalist buildings was followed by research into specific projects, like Moon Hoon's Two Moon, on sites like ArchDaily. He compiled a list of buildings and addresses, and spent several 10-hour days "hunting." The city has become so saturated with these buildings that, on the way to a known project, Olivier would stumble upon more. He describes the experience as exhausting, but ultimately rewarding: "day by day, I was discovering more and more and finding that they visually it had, I would say, a storyline, and the pictures were articulating themselves pretty well into a narrative."

With tiled and textured finishes and flowing forms, some of the buildings documented by Olivier are more Neo- that Brutalist. The commercialization of the style is evident—hence Olivier's use of the word "trend" to describe the phenomenon—and these buildings seem more popular and numerous in the city than 20th-century Brutalism ever was. And the photographer thinks the trend is still growing: "when I was walking, I could see that there was so much in construction, that were obviously kind of half-built, that were in this vein, in this style. So it seems like the trend is definitely not over."

Many of the projects which make their way into the series express their own architectural merit, but some are included to serve a different purpose: "some of them are just trying to be cool but they don’t really have a budget, or they don’t really have the concept, so it’s just like 'oh let’s just make something grey and minimal' and it’s sort of boring. I tried to ignore them and just focus on the ones that are a little bit more interesting because of their design or because of their function."

Packed into a commercial storefront and sandwiched between two other Neo-Brutalist buildings, one such project is the Torchlight Baptist Church, in which the architecture itself is neither particularly unique nor impressive. "You feel like they just kind of built that. I find it weird that it’s a church and it’s, you know, right next to a bar. Between a parking lot and a bar," explains Olivier. "It could be a store, it could be anything. It could be a record shop or whatever, but it just happens to be a hardcore Baptist church. This building doesn’t make sense but it’s quite intriguing, so I quite like it."

Olivier has his own theories about the growing prominence of Neo-Brutalism in Seoul. "Something that’s very Asian, or at least very Korean, is that it’s good to be the same as everyone else," he says. "Maybe in the US or in Europe, we try to differentiate and have a separate identity, as opposed to in Asia where it’s hard to do something new. But once one person does it, or a few people do it, then it kind of becomes acceptable and then everyone does it, and nobody feels like 'oh, you’re just copying.' Everyone does the same thing, that’s cool. And I think that’s happening in Korea: 'Oh! This is the new cool, that’s what we’re all gonna do now!' Until something new shows up."

Olivier is clear that he has no intention for his series to be a statement or judgment. It's an observation, a window for him to discover the city. He has plans to return to Seoul to continue the series, and thinks of this as "part one," for discovery and experimentation. 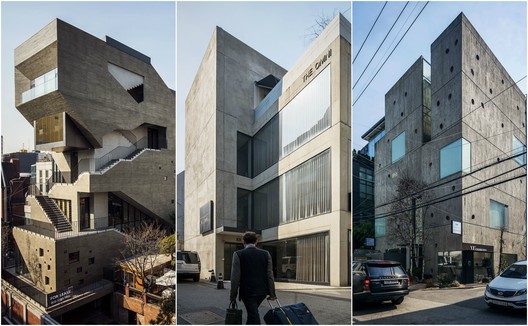