Italian firm Giovanni Vaccarini Architetti has designed the new Headquarters of the Swiss Société Privée de Gérance (SPG), built on Route de Chêne, at the gates of the historical center of Geneva. The work involved the conversion and extension of the existing building, starting with a glass façade that meets the need for solar shading in the interiors while achieving maximum visual permeability.

This façade also improves the acoustic and thermal insulation performance of the building: the double skin allows the envelope to be naturally ventilated and the perimeter ventilation system, combined with the internal forced ventilation system, reduces overall energy consumption. The steel structural elements on the façade, produced by Stahlbau Pichler (a specialist in the sector) produce a modular rhythm and the reflections on the glass shading panels give the project a particular "material weight." 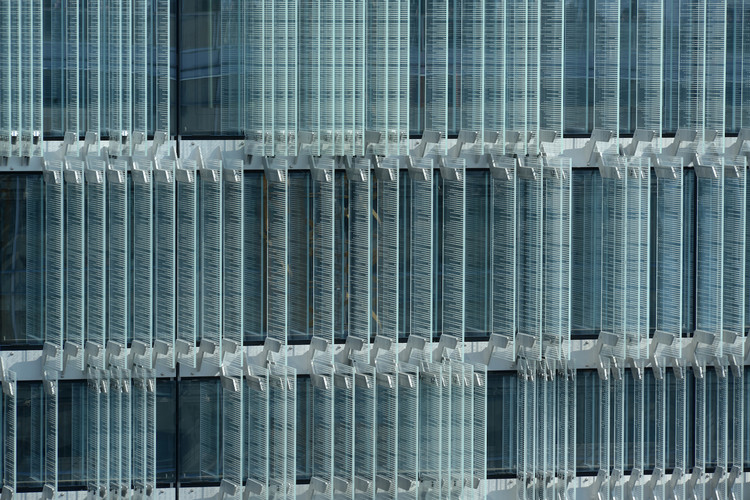 Description by the Architects.

The façade system is defined by simple rules which, through their repetition, produce a complex design of elements that varies with time and with the light conditions. The architect was inspired by the principles of Kandinsky, identifying the time variable and his capacity to achieve a scanning of the surfaces as capable of defining the compositional rhythm that shifts one’s perception of the architectural volume.

Weaving is the first step in composing... the weaving is a rhythm of signs, an abstraction of meanings, figures and suggestions - Giovanni Vaccarini.

The envelope is comprised of a triple layer of glass (hot chamber) added to which is a fourth layer with a ventilated chamber containing the package of micro-perforated Venetian blinds to regulate the light. Brise-soleil screens made of screen-printed glass are anchored on the outside, giving the façade’s external surface a variable modular pattern in terms of both the panel dimensions and the design on their surface.

The screen-printed graphic element on the screening panels helps to emphasize the reverberation effect produced, softening the perimeter surface of the building in a sort of evanescent and bright “nebula,” as Giovanni Vaccarini defines it. At night the glass panels are lit by white LED lights that bring the architectural block to life and make it shimmer, in dialogue with the nighttime urban landscape in which it is set.

Seen from the inside, the glass envelope produces an effect that Giovanni Vaccarini describes as the “augmented window,” through which the view of the environment surrounding the building is amplified, reflected and transformed by the blades of light. From the outside, the “thick” surface of the screen-printed glass panels and the steel become a volume and define the very body of the architecture, whose outlines dematerialize into a pulsating material entity sensitive to color changes in the surrounding area. The effect of this is that our perception of the building is continuously transformed. The overlapping visions we have of it, from both the inside and out, produce a kinetic effect.

For this project, Stahlbau Pichler conceived a specific engineering system that would allow the “glass fins” that characterize the envelope of the building to be anchored individually. This system was fundamental to reduce all visual encumbrances to a minimum and hence allow the highest possible precision and integrity to the facade, as required by the architectural project. Static and aesthetic needs came together. It was also very important to reduce all weights to a minimum so as to manage the 100 tons of glass that have been added onto a pre-existing building that had its own structural constraints.

The “Deep into the Surface” short-film, directed by Claudio Esposito and produced by The Piranesi Experience, in collaboration with The Architecture Player, investigates the abstract and conceptual dimension that architect Giovanni Vaccarini imparted to the façade system that characterizes the building of the SPG Headquarters in Geneva. A game made of simple rules, whose reiteration produces a complex play of elements to the point that its perception varies with weather and lights. The photography by Fabio Paolucci and the original soundtrack by Populous underline the exploration of these qualities and let the spectator perceive the depth of the surface and its apparent movement.