eVolo Magazine has announced the winners of its 2017 Skyscraper Competition. Now in its 12th year, the annual award was established to recognize “visionary ideas for building [high-rise] projects that through [the] novel use of technology, materials, programs, aesthetics, and spatial organizations, challenge the way we understand vertical architecture and its relationship with the natural and built environments.”

This year, 3 winners and 22 honorable mentions were selected from a pool of 444 entries. Among this year’s winners are a modular educational center and marketplace for sub-Saharan Africa, a vertical stack of factory and recreational space, villages embedded in mountains and even a skyscraper built within a giant sequoia. 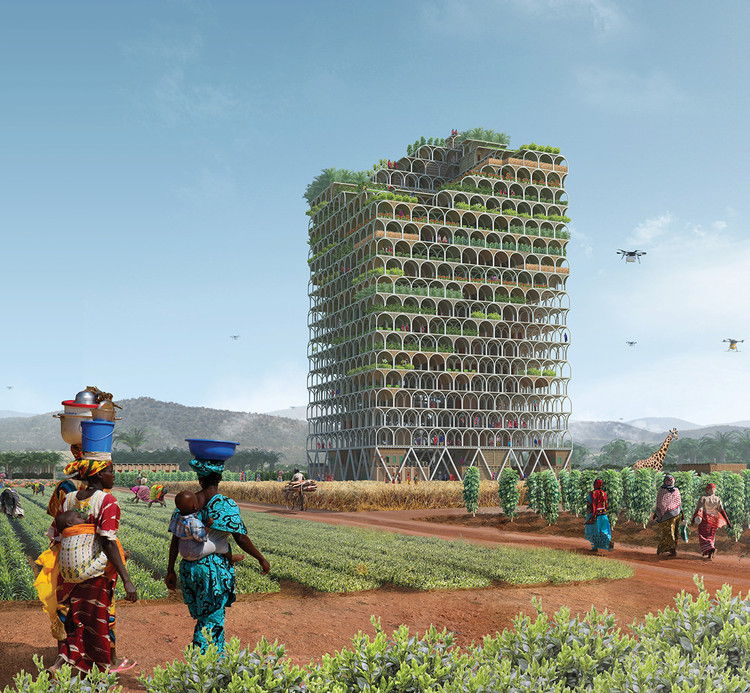 Mashambas is a movable educational center, which emerges in the poorest areas of the continent. It provides education, training on agricultural techniques, cheap fertilizers, and modern tools; it also creates a local trading area, which maximizes profits from harvest sales. Agriculture around the building flourishes and the knowledge spreads towards the horizon. The structure is growing as long as the number of participants is rising. When the local community becomes self-sufficient it is transported to other places.

The structure is made with simple modular elements, it makes it easy to construct, deconstruct and transport. Modules placed one on the other create the high-rise, which is a form that takes the smallest as possible amount of space from local farmers.

This is the vision we have for the cities of tomorrow: factories will be dissolved into small pieces and then be stacked together into high-rise vertical factories. By bringing factories back to the city, we can achieve zero CO2 emissions, be energy efficient, and provide higher quality of life to the inhabitants.

Due to the large population in Manila, a great amount of organic waste is produced daily. This waste will be the resource of the new vertical factory. All the waste will be dumped at the bottom level of the factory, and then they will be transformed into valuable products including water, fertilizer, heat, and electricity. We use these products to create different kinds of natural environment. The landscape is shaped according to the scale and shape of factories. Organic waste then can be turned into new city landscape while factories hide beyond natural surfaces. The main concept of this design is to let people be aware of the truth that the natural environment is a loop, everything you produce will then form the new world. Instead of criticizing the pollution problem we create the most ideal way for people to understand the best interaction between human and nature.

Espiral3500 is situated in “La Albufera”, an agricultural natural park which has been subjected to speculation based development and expansive growth. Tourism has become the main force of attraction. With it, it has produced an urban sprawl, which has disfigured the landscape. Tourism in the area causes an increase in population density of up to 1000% in some localities, turning them from ghost towns in winter to areas of high most density in summer.

The main investigation of this project is to understand the relationship between and the role played by private and public spaces within the skyscraper. Here, I use a spiral system in which the public spaces (namely the different types of streets) form rings that rest on a structural element. Spaces for private use hang from this structural element. This “inverted street” system allows for an immediate linking of public and private, while allowing for sufficient dissociation to grant desired privacy.

Earth Port One / Catherine He, Celia He

A competition now in its 11th year, eVolo Magazine has announced the winners of its 2016 Skyscraper Competition: a group of three top prizes and 21 honorable mentions culled from 489 entries. The award annually recognizes the vanguard of high-rise construction "through [the] novel use of technology, materials, programs, aesthetics, and spatial organizations." 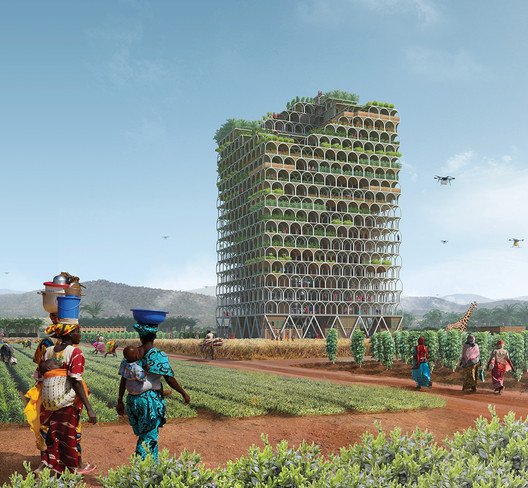