A competition now in its 11th year, eVolo Magazine has announced the winners of its 2016 Skyscraper Competition: a group of three top prizes and 21 honorable mentions culled from 489 entries. The award annually recognizes the vanguard of high-rise construction "through [the] novel use of technology, materials, programs, aesthetics, and spatial organizations." Among this year's winners are a project that proposes digging down and creating a megastructure along the perimeter of Central Park, a skyscraper that acts as a hub for drones in future commercial applications, and a tower that takes advantage of the climate of Iceland as an ideal location for data servers.

[This] proposal is a hybrid multi-functional mega structure. Not by building up, but by digging down, it reveals the bedrock (mountain) that was hidden under Central Park, and creates space along the new cliff. The ambition is to reverse the traditional relationship between landscape and architecture, in a way that every occupiable space has direct connection to the nature.

The Hive is an infrastructure project that can better meet the emerging demand for incorporating advanced Drone technology into daily life in New York City. The project was proposed as an alternative asset argument for the usage of the land on 432 Park Avenue, the project aims to create a central control terminal that hosts docking and charging stations for personal or commercial drones (unmanned aerial vehicles) in the center of Manhattan.

Our project is a vision of how could it be a future green data center located in Iceland. A data center is often a large industrial building without a significant architectural connotation, a big anonymous container. The main issue of our project is to investigate a new morphological solution that could represent both the complexity and the importance of the building into which we keep our data. Above all, we conceive the data center’s configuration in order to maximize the use of the available renewable energies and also to allow the re-use in a sustainable way.

Honorable Mention: "Air-Stalagmite: A Skyscraper To Serve As A Beacon And Air Filter For Polluted Cities" / Changsoo Park, Sizhe Chen

The 2016 Skyscraper Competition was sponsored by eVolo's media partners and v2com. For more on the project proposals, visit www.evolo.us. 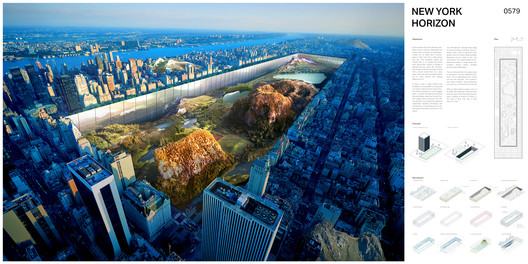