Plans have been announced by Tishman Speyer for "The Wheeler", a glassy new addition above downtown Brooklyn’s iconic Macy’s store on Fulton Street. The design is a collaboration between Shimoda Design Group and Perkins Eastman, and incorporates 10 stories of dynamic office and mixed-use space that will sit atop the existing department store.

Paying homage to the renowned 19th century Brooklyn developer Andrew Wheeler, the new offices will come complete with 16 foot ceiling heights, an acre of combined outdoor terrace gardens and decks, an amenity floor, and 360,000 square feet of rentable space, all while capturing the surrounding views of Lower Manhattan, the Brooklyn Bridge, the Statue of Liberty and New York harbour from its vantage point above the existing architecture. 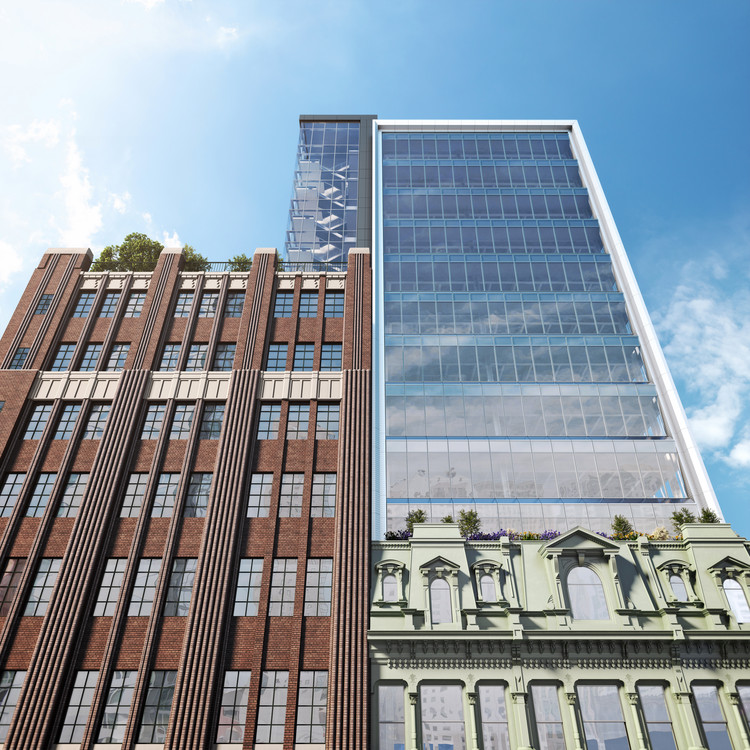 We are creating an environment that is every bit as innovative, energetic and dynamic as the borough itself, said Robert Speyer, CEO of Tishman Speyer, the developer behind the project. The Wheeler will celebrate its special location at the epicenter of Brooklyn and feed off the vitality of the iconic brownstone neighbourhoods, open spaces, cultural venues and creative communities that surround it on all sides.

The Fulton Street Macy's is, in fact, a melding of two different buildings and their respective architectural styles – the main department store occupies a nine-storey 1930s art deco structure, which is interconnected with a four stories cast iron building, the original Wheeler building constructed in the 1870s.

Prior to its conversion to a Macy’s in 1995, the art deco building was home to Brooklyn’s flagship Abraham and Straus Department store, one of the most esteemed and luxurious shopping experiences in the area, in the prosperous era of the Brooklyn Bridge. Shoppers could even be dropped directly from their horse carriages into the store via a porte-cochere entrance, though this has been bricked up today.

Earlier, in the 1870s, the wrought iron portion of the building housed a mix of occupants, accommodating a billiards lounge, the Olympic Theatre, as well as “J.B. Bunnells’ Dime Museum”, which advertised bearded ladies, giants, and “living skeletons”. The bulk of the structure has been torn down since, and only the façade remains.

Planned for completion in 2019, The Wheeler is Shimoda Design Group’s first New York-based project. It will connect the buildings and their distinctive histories as Brooklyn experiences rapid development and growth, while Macy’s will continue to operate the first four floors and lower levels of the two buildings.

Amongst the rapid materializing of telecoms, media and tech companies within the Blackfriar's Southbank region, PLP Architecture has been chosen for the design of a new office building with the challenge of successfully integrating into the ever-changing local fabric. "Our proposal speculates on the nature of the contemporary office tower," explained the firm. 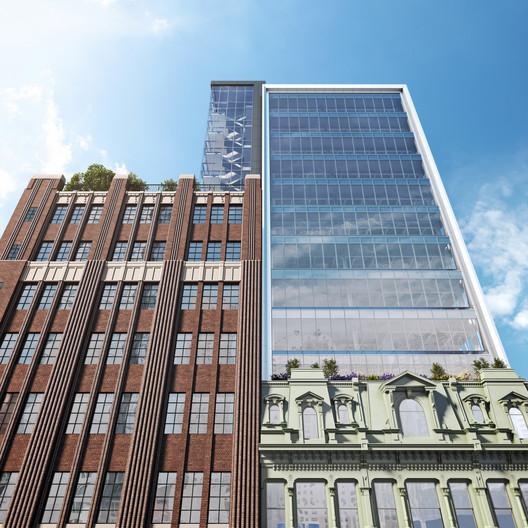