With their design approach treating the site as a work of art, GroupGSA’s proposal for a new hotel in Shanghai’s Fengxian District has been awarded 2nd prize in a recent competition. Located in the predominantly undeveloped Nangiao New City and part of the Yangtze River delta in south Shanghai, the Wanda Jinhai Lake Hotel aims to garner new interest in the region through the creation of a new social, cultural, and economic landmark.

At the center of the Jinhai Lake, the new hotel integrates into the site and provides scenic vistas of the surrounding waterscape. “Inspiration stemmed from the concept of Chinese Calligraphy, the stroke of a brush with its ink dripping in the water,” say the architects. “Our site is merely a piece of art and we plan to leave our mark via our architecture which is painted on the site following the lines and the movement of the surrounding context.” 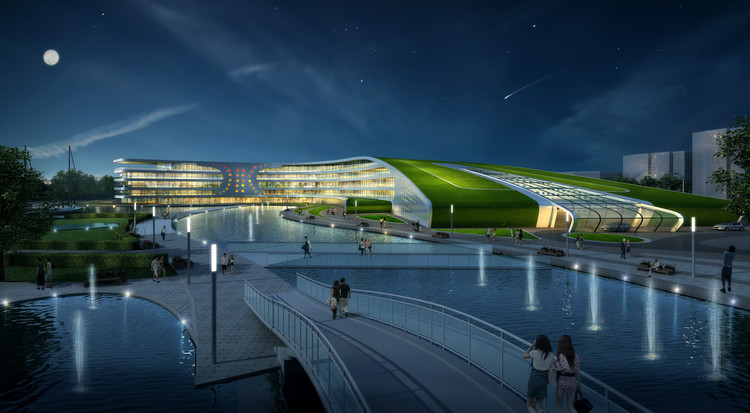 For efficient circulation, the fish-shaped building accommodates a ballroom and lobby with individual entrances, allowing for smooth guest movement in areas of high traffic. These also have independent parking entrances within close proximity, providing easy access to the basement.

Views of various scales are captured at different points throughout the hotel, capitalizing on the attractive landscape that surrounds the site with panoramas and more individual experiences. “The building provides a sensitive exploration of the site and an exotic interaction with the surrounding nature,” added GroupGSA.

Additional green roofs also serve as vantage points from a number of levels, further exhibiting the architecture’s ambition as an extension of the landscape.