As an architect, Frank Lloyd Wright was known for many things, but perhaps his most famed characteristic was his exceptional attention to detail – in many of his projects, each furniture piece was designed specifically for its intended location. This trait carried over into the design of the windows in his houses. Borrowing from organic motifs, Wright created a series of compositions suited for each house, from the tall, triangular stained glass windows of the Hollyhock House to the mahogany Samara clerestory panels of the Bachman-Wilson House.

But perhaps most famous of his window designs was the Tree of Life motif created for the residence of Darwin D. Martin House in Buffalo New York. The window reduced the image of a tree to its most essential geometric forms: a square representing roots; simple straight lines for the trunk; chevrons for the branches; and gold, red and green shapes as leaves. Each small piece of glass in the window was set into the brass frame at a specific angle to enhance light reflection to control the quality of light in the room.

In this photo series, the delicate construction of these windows is shown. Created for the Frank Lloyd Wright Foundation, the windows are assembled piece by piece, with the brass frame being assembled around the glass pieces. In total, each window takes about a month to construct, including 10,000 individual cuts of brass, a week of glass cutting, and a few days to solder everything together. Check out the full series below.

Architecture and art have had a long and complicated relationship. Many people consider architecture to be "the mother art," while others believe the burdens of program and pragmatism prohibit architecture from the realm of pure artistry. But what happens when architecture is displayed alongside art?

With the help of a vast array of software, Spanish architect David Romero has digitally recreated a series of iconic works by Frank Lloyd Wright, two of which have been demolished and a third that was never built. The three projects were based in the United States: the Larkin Administration Building (1903-1950), the Rose Pauson House (1939-1943) and the Trinity Chapel (1958). 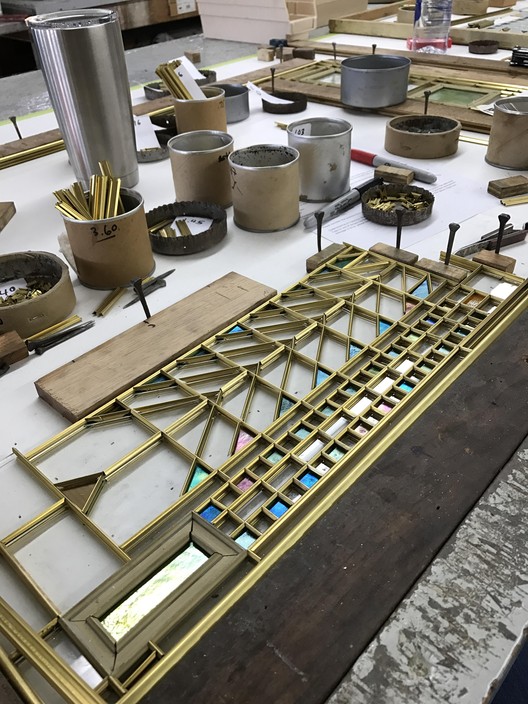