Save
House in Mantiqueira / Una Arquitetos 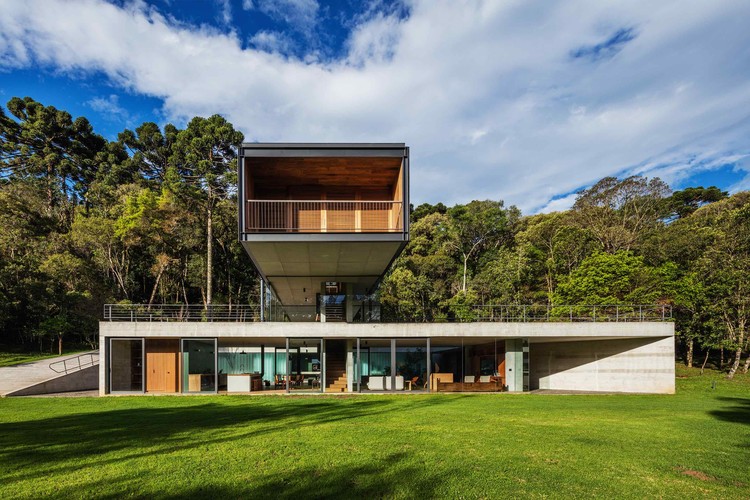 Text description provided by the architects. The house is built on top of Mantiqueira, a 500 km mountain range that crosses the states of São Paulo, Minas Gerais and Rio de Janeiro.

Its site is almost totally surrounded by woods, placed in an existing glade, gently sloping and facing a stream.

Project’s main intention is to establish multiple dialogues with the site and its many views across the uneven and astonishing landscape.

A concrete shear wall construction, conforming the ground floor level, aimed to acomodate itself to the land slope. It defines a platform, detaching from the upper bound, rising, and folding itself in order to create a patio, wich connects two bedrooms, living and dining room, kitchen and storage area.

Perpendicular and suspended over the structure below, a second volume accomodates two bedrooms at each end and a studio with a terrace, each with diferents openings orientations. The waggon metallic structure, supported by two concrete pilars, covers a 12 meters span above the patio, both rooms corresponding to the structure cantilever. It was brought to the ground in small pieces, easily assembled and welded on the ground and finally suspended by crane (in exact 15 minutes), avoiding undesirable temporary structures and impacts on the site.

Between the platform and the suspended waggon, was designed a open terrace deck, with aquatic gardens and a swimming-pool. This level is also the same as the nearest treetops. Here, as well as at severals others points of the house, spaces were created within their dialogue with the natural context.