In 2014, midtown Manhattan received its first supertall (taller than 1,000 feet) residential building, Christian de Portzamparc’s One57. The following year, Rafael Viñoly Architects’ 432 Park Avenue surpassed the mark, confirming the trend of sky-shattering, pencil-thin skyscrapers rising along Central Park’s southern edge. In all, at least 10 supertall projects have been planned for the neighborhood, earning it the nickname of Billionaire’s Row.

Responding to this phenomenon, architect Ioannis Oikonomou of oiio architecture studio has proposed an alternate solution, called “The Big Bend,” that asks the question: “What if our buildings were long instead of tall?” 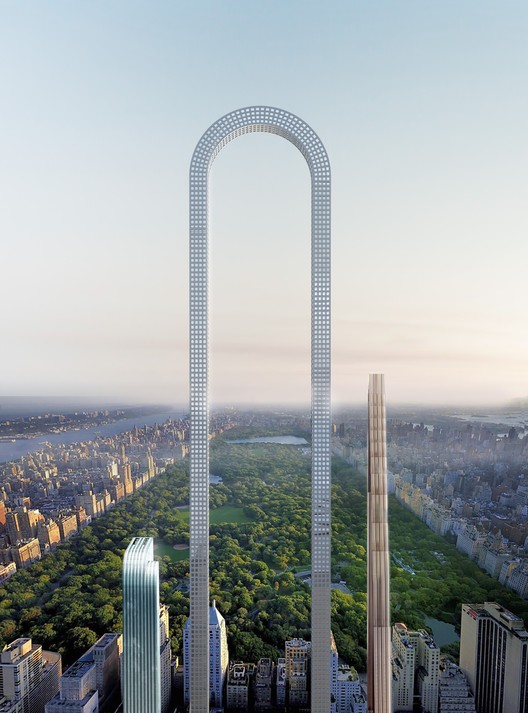 The proposal envisions a tower that, rather than continuing skyward, bends over on itself to create a massive inhabitable arch. The resulting building (with its non-coincidental similarities to 432 Park) would stretch 4,000 feet long in total, meeting the ground in two locations straddling several existing buildings.

“New York city’s zoning laws have created a peculiar set of tricks trough which developers try to maximize their property’s height in order to infuse it with the prestige of a high rise structure,” explain the architects. “If we manage to bend our structure instead of bending the zoning rules of New York we would be able to create one of the most prestigious buildings in Manhattan. The longest building in the world.”

To allow for circulation around the bend, Oiio envisions using the latest in elevator technologies, Thyssen Krupp’s MULTI system, which allows elevators to travel independently both vertically and horizontally through shaft loops within a building.

“The Big Bend can become a modest architectural solution to the height limitations of Manhattan,” the architects conclude. “We can now provide our structures with the measurements that will make them stand out without worrying about the limits of the sky.”

The World Now Has 100 Supertall Buildings

Following the recent completion of 432 Park Avenue in New York City, The Council on Tall Buildings and Urban Habitat (CTBUH) has announced that there are now 100 supertall (300-plus-meter) skyscrapers in the world. The majority of these skyscrapers are in Asia and the Middle East, mirroring construction trends that have emerged over the past decade.