Sliperiet, Umeå Arts Campus has developed a new type of 3D printer that features increased printing flexibility at a lower cost. Called Hangprinter. The system is suspended by a series of thin fishing lines, it does not require a frame or rails, but rather, it can be attached to any stable surface, for instance, a ceiling.

As a part of the +Project innovation initiative, the Hangprinter is in the process of making a “Tower of Babel,” a project that currently measures almost three-and-a-half meters tall, making it the tallest object the system has made, as well as “much taller than the scope of any commercially available large format printer.”

Invented by Torbjørn Ludvigsen, who began the project while a student at Umeå University, the Hangprinter’s design was originally formulated to reduce costs. “The frame or box was almost half the cost of the final 3D printer, and I thought I could do without it,” said Ludvigsen. Hangprinter can be put together for about 200 Euros. 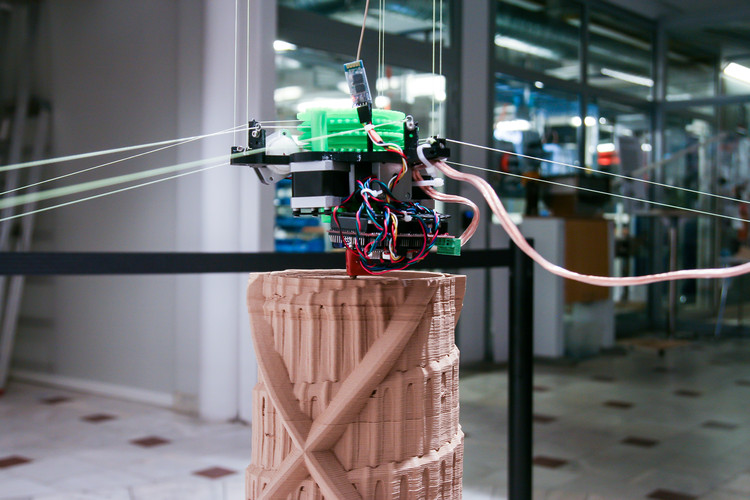 Without the constraints of a frame or box, the printer is limited only by the vertical height of whatever it is suspended from.

“I find this technology very exciting as it gives us new and increased flexibility,” said Linnéa Therese Dimitrou, Creative Director at Sliperiet. “Opportunities include printing over vast areas and printing large volumes – horizontally and vertically – without the need to build rails or frames. The setup could also be scaled up and adapted for other materials. Future versions of the device could be equipped with sensors for greater precision and outdoor use. The tower project at Sliperiet, where attachment points are moved along as we ascend, shows that this is a feasible idea.”

“As far as I know,” noted Ludvigsen, “the HangPrinter is the only 3D printer of its kind. There are parallel cable-driven robots and other cable-driven 3D printers, but the HangPrinter is unique in that all the parts except the energy source are mounted on the mobile device, and that it can use existing structures–in this case, the walls–as a frame.”

In an effort to encourage collaboration, blueprints for the Hangprinter are available for free download. 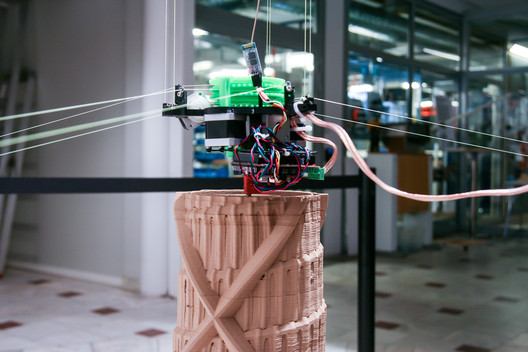