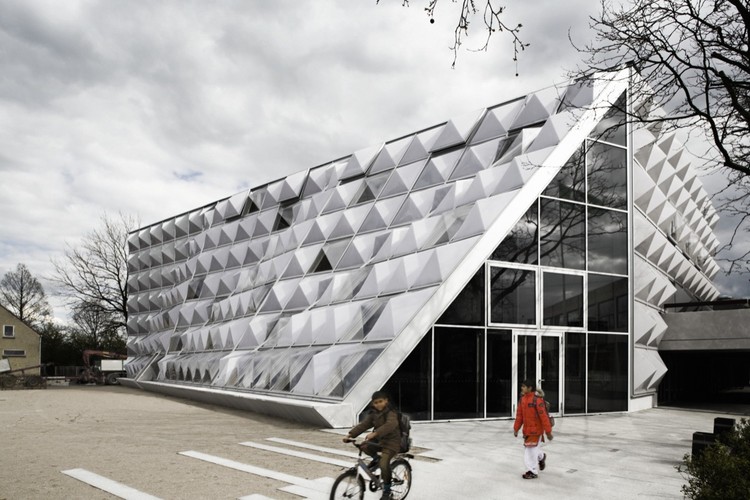 Text description provided by the architects. The project for the extension and renovation of Taastrup Theatre seeks to improve the communication of the building with its environment – a social housing neighborhood.

Formally we were commissioned to improve the energy consumption of the 1970s local community theatre in the Copenhagen neighborhood of Taastrup. Yet, we use this opportunity to improve the general appeal and functionality of the building by introducing a second (isolating) theatre curtain around the rough concrete structure.

By adding this new layer in front of the existing rough concrete structure, the building is extended and opened as wide as possible towards Kjeld Abels Plads north.

The new translucent facade subtly reminds us of a theatre curtain about to open when the play starts. In fact, when the tickets are outsold or the show is on, red lights underneath the facade broadcast the special atmosphere of this magic moment towards the square. This new composition underlines the unity of the old building and its extension as one piece of architecture.

The facade is conceived as a translucent curtain of acrylic prisms elegantly embracing the existing building, and creating a new open foyer, arrival area, and café. A whole new spatial dimension is added to the building newly connecting the formerly enclosed interior with the outside. Now the theatre visually and spatially connects to both Kjeld Abels Plads north and the protected green courtyard south of the theatre. With this overall concept, the theatre now has the possibility to involve the surroundings by exposing its activities. The facade is assembled from acrylic prisms. The material is very robust and because of its shape it has an exciting effect at day and night time, when the light from inside will glow out to the surroundings. The prisms vary from totally clear and transparent over translucent to opaque. Because of the many elements of irregular shapes and the variance in translucency, the facade is a beautiful play of shadows and reflections.

The facade of the theatre includes a number of gates creating connection and access between the foyer and the theatre space. These gates can be opened or closed depending on the arrangement. So the theatre has the possibility to work as one coherent floating space, or separately as a theatre space and a foyer.

With the renovation of the interior we pay reference to the aesthetics of classical theaters in order to soften the appearance of the rough concrete structure. Gold colours, mirror pixel tiles, crystal chandeliers – all things that not only children associate with theatre - are mixed with fluorescent lamps, an RGB bar, and modern design chairs by Paustian.

The theatre’s service functions are upgraded: Restrooms and café are moved from the basement to the first floor, which means that now all non-technical functions are gathered on the ground floor. Bar, box office, and administration are consolidated as a functional block that can now be run by one person. Hereby, the staff flow is optimized so that capacities become available for theatre work.

The modernisation considerably improves the theatre’s logistics. The new facade wraps the theatre in new dramatic apparels. Together, interior renovation and the exterior curtain help establishing a solid project that improves the organization and communication of the building significantly - we proudly present Taastrup Theatre! 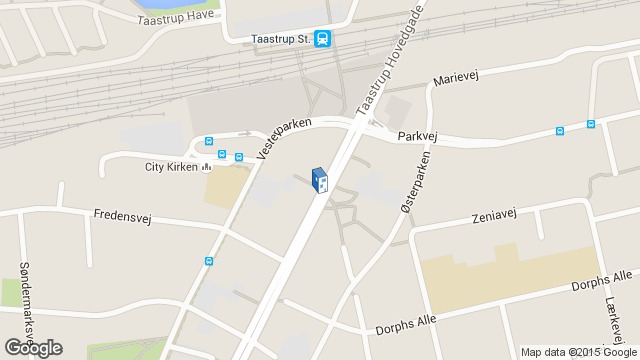