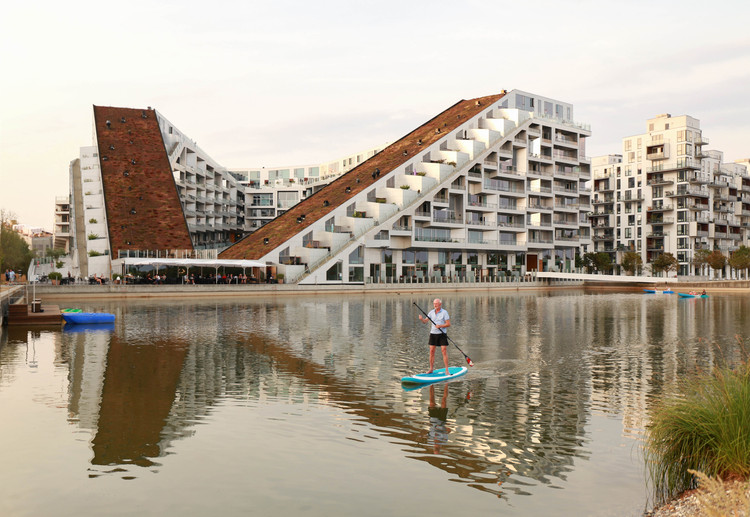 Celebrating its third project with the same development team in the maturing neighborhood of Orestad, the construction of the 61,000 sqm 8 House has come to an end, allowing people to bike all the way from the street up to its 10th level penthouses alongside terraced gardens where the first residents have already moved in.  Follow the break and you can find images of 8 House at night, interiors, gardens, and diagrams along with a more detailed project description and quotes from the architects.

You can also check our previous feature on the construction of this amazing project.

The bowtie-shaped 61,000 sqm mixed-use building of three different types of residential housing and 10,000 sqm of retail and offices comprises Denmark’s largest private development ever undertaken. Commissioned by St. Frederikslund and Per Hopfner in 2006, the 8 House sits on the outer edge of the city as the southern most outpost of Orestad. Rather than a traditional block, the 8 House stacks all ingredients of a lively urban neighborhood into horizontal layers of typologies connected by a continuous promenade and cycling path up to the 10th floor creating a three-dimensional urban neighborhood where suburban life merges with the energy of a city, where business and housing co-exist.

“We have now completed three remarkable buildings in Orestad, the VM Houses, The Mountain and finally the 8 House – which is the sole result of a good and constructive collaboration with talented young architects who had a good understanding for the economical aspects,” Per Hopfner, Hopfner Partners.

The 8 House creates two intimate interior courtyards, separated by the centre of the cross which houses 500 sqm of communal facilities available for all residents. At the very same spot, the building is penetrated by a 9 meter wide passage that allows people to easily move from the park area on its western edge to the water filled canals to the east. Instead of dividing the different functions of the building – for both habitation and trade – into separate blocks, the various functions have been spread out horizontally.

“The apartments are placed at the top while the commercial program unfolds at the base of the building. As a result, the different horizontal layers have achieved a quality of their own: the apartments benefit from the view, sunlight and fresh air, while the office leases merge with life on the street. This is emphasized by the shape of 8 House which is literally hoisted up in the Northeast corner and pushed down at the Southwest corner, allowing light and air to enter the southern courtyard,” Thomas Christoffersen, Partner in Charge, 8 House, BIG.

A continuous public path stretches from street level to the penthouses and allows people to bike all the way from the ground floor to the top, moving alongside townhouses with gardens, winding through an urban perimeter block. Two sloping green roofs totaling 1,700 sqm are strategically placed to reduce the urban heat island effect as well as providing the visual identity to the project and tying it back to the adjacent farmlands towards the south.

“8 House is a three-dimensional neighborhood rather than an architectural object. An alley of 150 rowhouses stretches through the entire block and twists all the way from street level to the top and down again. Where social life, the spontaneous encounter and neighbor interaction traditionally is restricted to the ground level, the 8 House allows it to expand all the way to the top,” Bjarke Ingels, Founding Partner, BIG.

The 8 House uses size to its advantage by creating immense differences in height thereby creating a unique sense of community with small gardens and pathways that remind you of the intimacy of an Italian hill town. With spectacular views towards the Copenhagen Canal and Kalvebod Faelled’s protected open spaces, 8 House provides residences to people in all of life’s stages through its 476 housing units, including apartments of varied sizes, penthouses and townhouses as well as office spaces to the city’s business and trade in one single building.

“8 House is our second realized example of architectural alchemy – the idea that by mixing traditional ingredients, retail, row- houses and apartments in untraditional ways – you create added value if not gold. The mix allows the individual activities to find their way to the most ideal location within the common framework – the retail facing street, the offices towards northern light and the residences with sun and views to the open spaces. 8 House is a perimeter block that morphs into a knot, twisting and turning to maximize the life quality of its many inhabitants,” Bjarke Ingels, Founding Partner, BIG