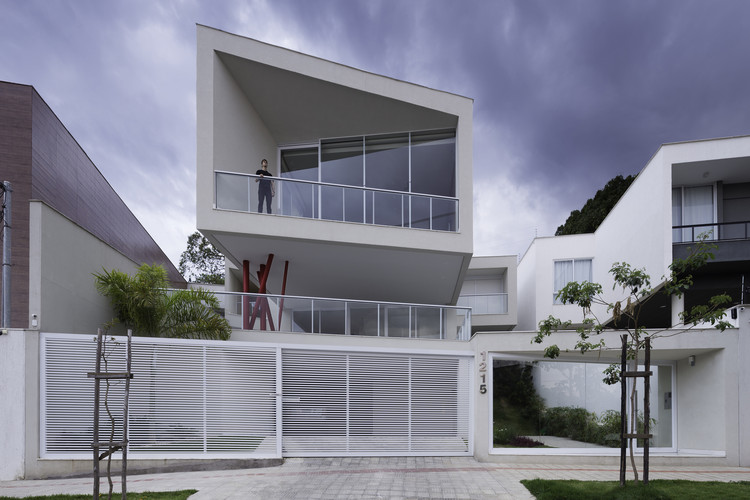 Text description provided by the architects. Located at the foot of the Serra do Curral, the residence has a privileged view, since it is inserted in an urban context without major visual obstructions.

Its surroundings, being already anthropomorphized, called for an extensive study of the implementation and use of the building. The solution found for the facade was to adopt a diagonal that did not obstruct the vision of the other existing houses nearby. The effect obtained was highlighted by the balance of the third floor, plus the slope of the roof.

Still in analysis to the nearbysites, the building looked for a core concentration that was harmonized with the neighboring houses. The plant conformation resulted in the intimate area to the right of the site and social area to the left, thus coinciding with the uses of both neighbors.

The columns that support the third floor come as perhaps themost inquiring element of this project. In vibrant color and eccentric shape, they spring up as a featured icon in the overall composition. It plays with itself in a constant state of motion, frozen at some point in the staticity of the concrete. It questions the coldness and solidity of the austere colors of the whole, provokes the pallor of the white, and brings the eyes to what might have been conventional.

Developed in three floors, the project seeks better adaptation to the site. Using its natural slope, the building occupies the spaces according to the topography. At the access level are located the garage and social hall. The office and private leisure areas, consisting of a gym, TV room and balcony are located on the second floor.

The intimate and social leisure areas are on the third floor. A large living room area is connected to the rest of the residence by a grassy courtyard. Referring to ancient Greece, this large central courtyard is flanked by the dorms and connects at both ends the space intended for the family and friends gatherings and the rest of the residence. This configuration makes up an intimate and cozy living space while being evident in the open air. In general, the whole functional part of the house was developed on a single floor.

The large openings of the residence aim at the optimization of the lighting and ventilation in the building and also enhancing the sights. In analogy to these spans, the project has eliminated the physical barriers in the social area by producing an open and fluid environment.

The JP+C Residence is against formal clichés and protocols. The everyday routine mixes with the sporadic in the same environment designed for both purposes. The geometrical formality of the straight line, the audacity of the acute angles, the antithesis between full and empty, the composition of the facade reflects the simplistic interior and, at the same time, the complexity of the work. 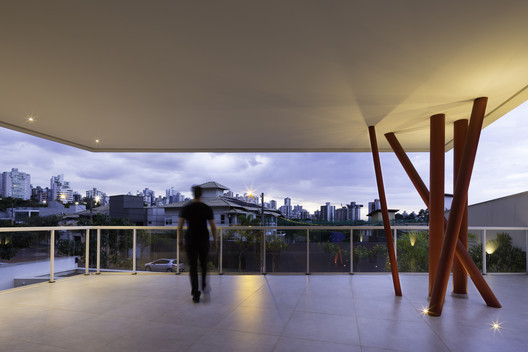