The construction of this exclusive cycling path was promoted by the Xiamen City Government to provide inhabitants with a new sustainable transportation alternative that could significantly reduce vehicular traffic on the city's already congested highways.

The project was designed by the Danish firm Dissing + Weitling, the team behind 2014's "Bicycle Snake" in Copenhagen. Talking about their latest projects, the architects explain that it was developed "with a vision to inspire people to prioritize green alternatives, such as the bicycle, instead of the automobile."

As a result, connections to other public transport systems can be made at 13 points along the cycling path, helping to facilitate intermodality in the daily commute of inhabitants across three financial centers and five residential neighborhoods of the city.

Eleven of the available exchange points correspond to bus stops on the Bus Rapid Transit (BRT) route that runs on a elevated road parallel to the cycle path. The remaining two connect to Xiamen's metro system.

It also has 11 spiral ramps to allow for uninterrupted riding, public bicycle stations housing 355 bikes, 253 parking spots distributed on seven platforms and 30 thousand lights to make the structure safe for cycling at night.

Although the new infrastructure is intended primarily for cyclists, accommodating up to 2,023 bikers per hour, several lanes have been included for pedestrian traffic that are marked with different colors on the pavement to avoid accidents.

During the path's trial period, it will be open between 6:30 am and 10:30 pm daily. It is expected that just in the first half of 2017, 3.5 million cyclists will use the new infrastructure.

Take a tour of the new cycling path in Xiamen in the video below. 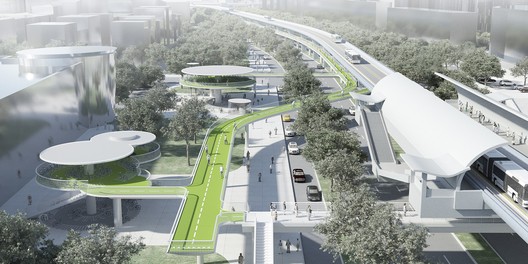