Save
Who Are RCR Arquitectes? 9 Things to Know About the New Pritzker Prize Winners
Share
Or
Copy

Today, the Pritzker announced Rafael Aranda, Carme Pigem and Ramon Vilalta, the three founders of Catalan firm RCR Arquitectes, as the recipients of the 2017 Pritzker Prize. As designers of an architecture that is both stylistically and physically local—RCR Arquitectes’ work is mostly found in Catalonia, although recent projects have taken them to France and Belgium—the firm has established a strong profile in north-eastern Spain and a cult following among academic circles around the world. However, other members of the architectural community might find themselves forced to reach for the nearest search engine. For those people, the following 9 facts will provide the information you need to understand architecture’s newest Pritzker Prize laureates. 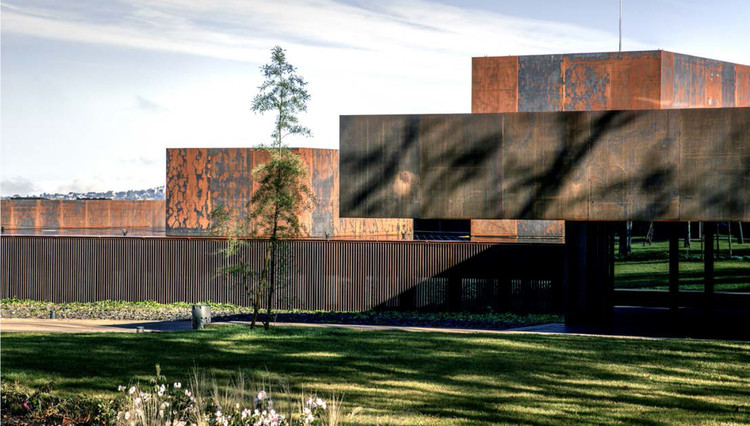 1. RCR Arquitectes was established in 1988 in Olot, Catalonia, Spain

Shortly after graduating from Escola Tècnica Superior d’Arquitectura del Vallès (ETSAV), Rafael Aranda, Carme Pigem and Ramon Vilalta returned to their home town of Olot, which today has a population of 34,000. The city is known for its landscape, and is surrounded by 4 volcanoes within the Garrotxa Volcanic Zone Natural Park. The firm’s proximity to nature has had a key influence on their design sensibilities.

2. The trio attributes their early success to winning a competition to design the Punta Aldea Lighthouse in 1989 [1]

In their design for the lighthouse, RCR Arquitectes attempted to rethink the building typography entirely: as Carme Pigem explained to architecture historian William JR Curtis a lighthouse “is not necessarily a tower but a light at a certain height,” [2] and as a result RCR Arquitectes’ design bears no resemblance to what we normally think of as a lighthouse.

3. The firm has been recognized by numerous awards and institutions

4. They turned down their first offer for a major commission

Speaking at an event in the Czech Republic, Carme Pigem explained how the firm turned down an offer to design a 300-apartment complex based on advice from a professor, saying: “you have to turn down the first large customer. When you, beginning architects, are approached by someone offering you a gigantic project in an immensely attractive place, turn them down. It is a trap. Many talented architects spent the first years of their careers chasing a chimera. The result was only an enormous amount of wasted energy, which they could have invested into small but meaningful projects.” [3]

5. The firm’s own studio was converted from an early 20th century foundry

The Barberi Laboratory, which was renovated by the architects between 2005 and 2008. The renovated makes a point to show off many of the original structure’s industrial components, and features an office for the founders, another workspace for the firm’s staff, and a separate pavilion in which they deliberate on designs which is described as “like a teahouse… surrounded by the stark walls of the ruins.” [4]

6. Aranda, Pigem, and Vilalta have founded 2 institutions which work alongside their firm in order to further their architectural aims

In 2008, the trio founded the RCR Lab A, an “open architecture laboratory” designed to provide “a space to develop research and creative transversality.” Then, in 2013, they founded the RCR Bunka Foundation, which aims to “stimulate socially the assessment of architecture and landscape and implicitly, arts and culture in general” through exhibitions and events. The foundation is also tasked with cataloging and preserving the firm’s architectural output such as drawings and models.

7. Despite being lauded for architecture grounded in its local surroundings, RCR Arquitectes’ influences are global

Among the influences cited by the firm are Alvar Aalto, [2] Richard Serra, Pierre Soulages, and Japanese architecture, particularly SANAA. [5]

8. Key themes of their work include the connections between indoor and outdoor spaces, acknowledging the passing of time, structure and materiality, and the dematerialization of their spaces.

According to Josep Maria Montaner, the firm are “masters at creating indoor and outdoor spaces, to the extent that they have tenaciously continued the line of modern architecture, breaking the boundaries between interior and exterior. They have perfected an ability to create filters and in-between that to not respond to the classic inside-outside duality.” [4] Meanwhile, a 2015 exhibition about the firm at the Palau Robert in Barcelona was organized around 7 themes of RCR’s work: Mediation with the landscape, Space, The presence of time, Public and social function, Structure and materiality, The system, and Dematerialisation. [6]

9. One of their most commonly used materials is Cor-ten steel

Cor-ten steel, or in some cases simply rusted recycled steel, is used in a number of RCR Arquitectes’ most recognizable projects, including the Bell-Lloc winery, the Soulages Museum, and the La Lira Theater. Their preference for the material seems to be related to their desire to show the passage of time with their projects. “For RCR steel is a modern industrial material which nonetheless suggests the archaic,” explains William JR Curtis, “and which of course weathers over time.” [5]