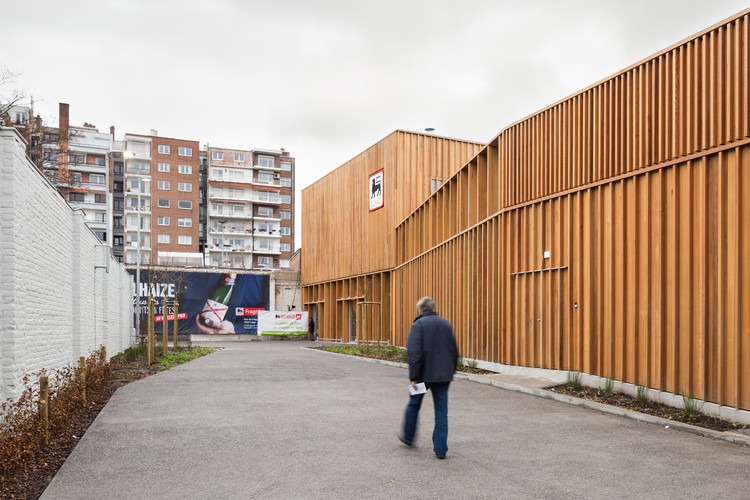 Text description provided by the architects. Programmes of this type are notorious for producing mundane buildings – devoid of interest at best, and often outright urbicide. Our vision goes beyond the mere cosmetic upgrade of the decorated shed, asking: How can the designers of a supermarket quietly succeed in weaving part of the urban fabric?

Urbanism
Situated in the middle of an elongated 180m long and largely paved city block, the project aims to improve the quality and permeability of the site, both for users of the building and for residents of the area.

In order to create a new public pedestrian crossing which splits the block, the existing building – which was due for demolition – is relocated to the edge of the plot. The new building helps to upscale a difficult zone, enclosed between high party walls.

The clarification of the flow of vehicles on the whole site and placement of a substantial part of the car park underground reduce the visual impact of the cars, and allow large areas to be covered with greenery. This also improves the routes across the block for soft mobility.

The rooftop of the building, visible from many nearby multi-storey apartment buildings, is broken up by emergences which reduce the volumetric impact of the supermarket. The green roofs covering the various parts of the project, combined with a long interior patio planted with trees reinforce the presence of greenery in the block.

Architecture
The work on perception started with the roof is continued with the treatment of façades. They are marked by a series of pleats which enliven pedestrian routes along the alleyway.

Wood is used throughout the project, from structure to façade. Beside its reduced impact in terms of grey energy, the choice of this eco-responsible material is also motivated by its ability to create a building that is visually lighter, easily adaptable and/or recyclable.

Cedar cladding, with variable rhythmic scansions and its warm materiality, offers an additional antidote to the mineral surfaces of the block.

The interior of the shop breaks away from the usual practice in that special attention is paid to visual contacts with the exterior and the penetration of daylight, coming from the alleyway side and along the large patio at the rear of the building.

The singular ambition of this project is to show that a development programme as basic as a supermarket can, if handled with ambition and craftiness, become a subtle operation of urban acupuncture that heals the place where it is built. 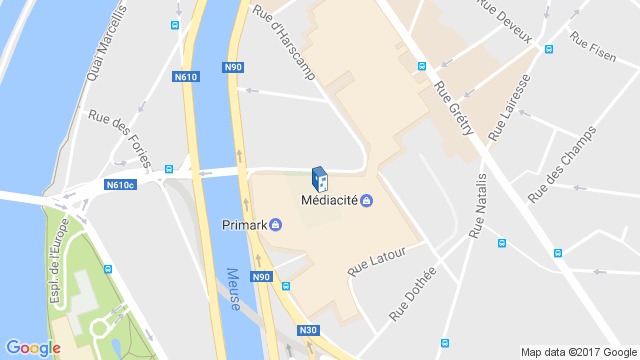