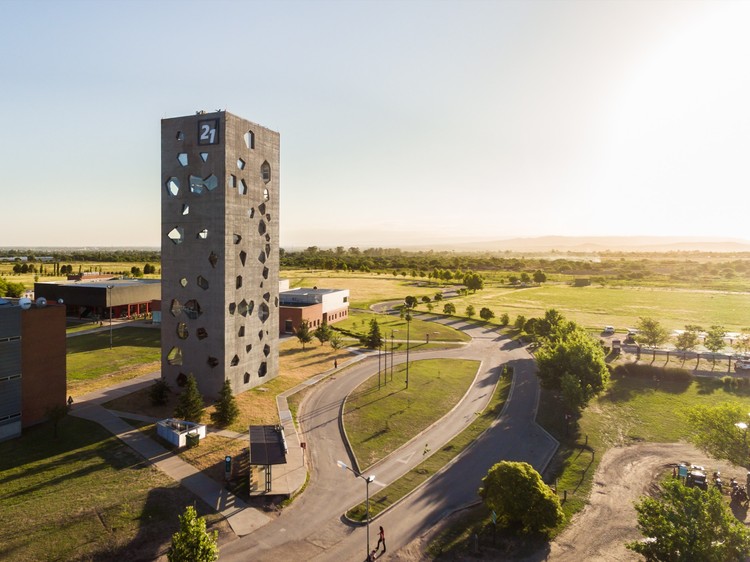 Text description provided by the architects. The Experimenta 21 tower and a new open amphitheater now join a series of buildings that have been completed over time as well as a fully developed grove to provide a boundary for the large yard designed by César Pelli in 1999 as part of the Master Plan for Universidad Siglo 21.

This new building is made up of a set of workshops and laboratories where teaching utilizes advanced and clearly unconventional techniques and technologies.

Consequently, the building, as a container, also had to express both externally and internally this unconventional and somehow disruptive character.

At the same time, it had to manifest itself as the visual icon of the University adopting a vertical development of slender proportions as opposed to the horizontal development of the Campus, clearly marking its location in the City’s profile.

The designed image is that of a concrete prism perforated randomly as a porous body in which no scalar relationship can be perceived.

This porosity reveals a luminous and transparent interior in which the dynamics of all the building’s activities unfold.

This effect is magnified at night by the brightness of its irregular perforations cut out against the dark background of the sky.

The functional scheme is simple, elements of vertical circulation provide access to a hall whose dimensions allow it to function as an expansion of the workshops it serves and that can potentially accommodate future growth.

This space is practically transparent and composed of two vertical courtyards—the free space left by the metallic structure of the elevator passage and the glass floors supported by a metallic lattice that transform it virtually into a great courtyard of light through which workshops are Illuminated and that allow, at the same time, students to view the diversity of activities carried out there.

The technical resolution of the building was conceived based on the unconventional use of resources available in the local market.

The technical-economic problems posed by its slenderness and the need to not place intermediate supports in the utilized spaces, led to approach the buildingthrough the sliding concrete technique that allowed the execution of a structural façade with the form of a prism container 41 meters in height in only 14 days of continuous pouring of concrete.

The prefabricated and prestressed slabs that areviewedfrom the workshopswere mounted on continuous metal brackets fixed to the perimeter partitions.

The rest of the building, including its interior storefrontwas resolved through a metallic structure of rolled profiles assembled on site by means of bolted joints that help to reaffirm an image close to that of an active workshop.

The building has been designed with special regard to its energy efficiency.

From the point of view of its sustainability, the design has operated at several levels. The first is to have the greatest natural lighting with the least thermal gain or loss. The perforations that lead directly outdoors are regulated according to the interior needs and are complemented by the full illumination through inner courtyards with temperatures controlled by natural means. In this sense, and considering the climatic conditions of the site, a porous surface wetted laminarly was placed on the inner side of the concrete walls of the courtyards, where the outside air provides latent heat, cools down, and enters in a controlled way through the windows of the workshops exiting through the opposite wall by an also regulated evacuation plenum.

All rainwater is stored in a cistern on the roof from where it descends through the concrete walls of the courtyards, is collected, and accumulates in a transparent tank that serves as the entrance hall roofand is recirculated back to the upper reservoir in a continuous cycle.

The exterior concrete walls complement its great thermal inertia with its insulation and inner lining helping to naturally regulate the periods of average temperatures.

Although the building is equipped with air conditioning, the goal is for its use to be minimal and only in extreme temperature situations. 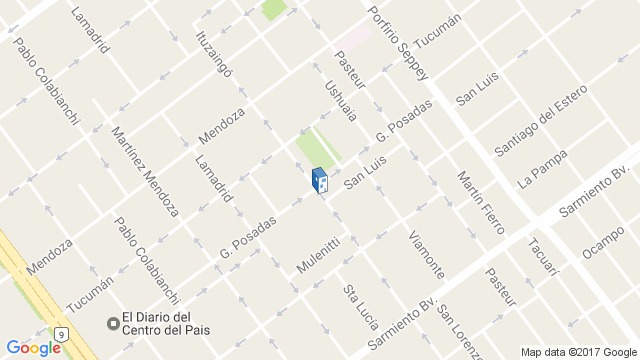 Location to be used only as a reference. It could indicate city/country but not exact address.
Share
Or
Copy
About this office
MORINI Arquitectos
Office
••• 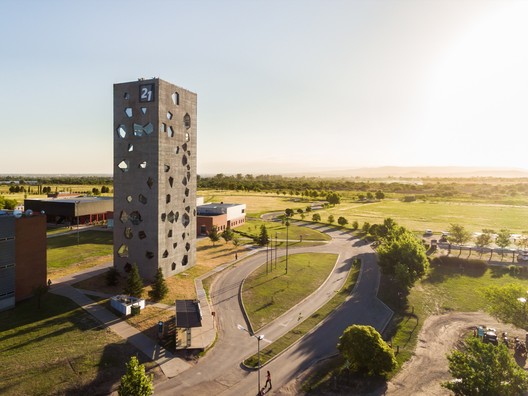