London-based firm Tonkin Liu has released images of its competition-winning Trade Centre in Zhengzhou, China. The Cradle Towers of Zhengzhou will comprise of five mixed-use towers swooping out of a ring-shaped podium. Inspired by the nearby Songshan mountainscape, the scheme aims to celebrate the city’s origins as it rockets into a high-tech future.

The Cradle Towers will accommodate offices, apartments and a hotel, emerging from a podium containing retail and leisure functions. Hollowed out to form a ring, the podium acts as a threshold between the hard, dense urban context of Zhengzhou, and a soft, sheltered landscape within.

Varying in height, the family of five towers form a responsive urban mountainscape against the Zhengzhou skyline. Glass facades are fitted with a responsive skin controlling solar shading and privacy. From afar, the skin creates a transition from dark to light as it scales the building, transforming the podium into a heavy mass and the towers into lantern-like tips.

Zhengzhou is the cradle of the nation’s civilization. It sits at the heart of one of the earliest settlement areas of ancient China. Emblematic of the parks of the nearby Songshan mountainscape, and the Round Sky and Square Earth proverb, the Cradle Towers celebrate the city’s origins as it looks to build its future – Tonkin Liu 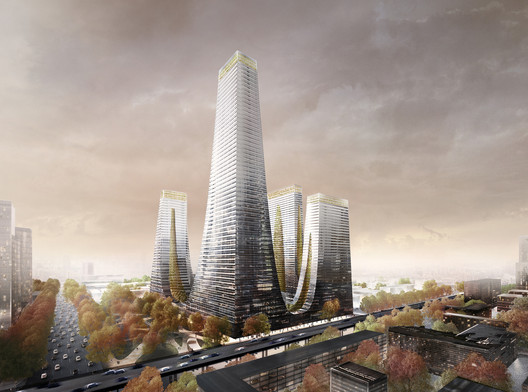