Zaha Hadid Architects has released new images of Leeza SOHO, their mixed-use design in Beijing's Lize Financial Business District. The project is notable for its 190-meter tall atrium, which rises the full height of the building, uniting two twisting sections which contain 172,800 square meters of office and residential space. At the base of the tower, a new transit hub straddles a subway tunnel that is currently under construction.

The building is currently under construction, with 20 of its planned 46 floors completed. When finished in 2018, the building will stand 207 meters tall--the tallest of ZHA's four collaborations with SOHO China which include Galaxy SOHO and Wangjing SOHO. 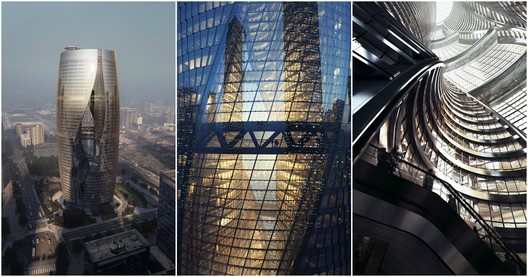