Save
Duplex & The City / Luigi Rosselli 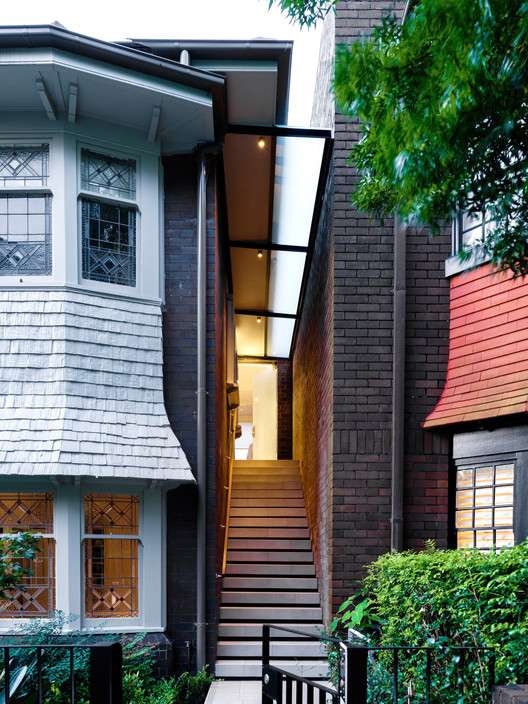 Text description provided by the architects. Equivalent to the brownstones of New York, this interwar duplex is a humane scale solution to housing in the Sydney city fringes.

Shoulder to shoulder with other apartment buildings, the original 1920s two-storey flats were transformed into a four storey block with a basement carpark and cellar, a ground floor garden apartment and a two-storey penthouse.

Just forty-percent of the existing structure was demolished, mainly the dysfunctional rooms at the back of the property, which were replaced by a modern four-storey structure.

The front of the property, with its original Queen Anne leadlight windows, liver toned brickwork and timber shingles, was left intact to preserve the building’s consistency with the prevailing style of the street.  No one would believe that behind those refined front rooms the apartments would morph into modern open living spaces with generous terraces that allow the inhabitants to admire the views of the city, populated with skyscrapers designed by Renzo Piano, Sir Norman Foster and Ingenhoven Architects, and enjoy glimpses of Sydney Harbour beyond.

The duality of the design also reflects the personalities of the residents: urbane and loaded with old world culture and family history, yet passionate about modern art, architecture and urban living.  Here the interior architecture plays greater role than in a more spacious suburban setting.

The use of every millimetre has been carefully planned to condense the content of a large house into this city pad, with an eclectic collection of furniture and art; the skilful joinery design by Project Architect, Jane McNeill aimed to provide as much storage as possible for the owners, while lending elegance to the interiors in touches such as the dressing table in the dressing room.

The cultured owners could not part with their books, so Jane created for them a library and study area with room for a comfortable arm chair, tucked beside the Jacobs Ladder stair that climbs to a glazed roof hatch and a landscaped roof terrace and a spa pool with a city skyline backdrop.

Product Description. The JWI vertical louvre system has been used on the rear northern extension of the building which faces both Sydney city and harbour views and an adjacent laneway-like road.  The primary purpose on the louvre system is to provide a controlled method of adjusting levels of privacy and light, whilst allowing glimpses of harbour and city views. The louvres set up a horizontal band of anodised aluminium matching the finish of the window frames, and gives the northern facade a dramatic contrast of textures.