New typologies in architecture generally arise in two ways. The first is through a reevaluation of existing typologies that cater to familiar programs such as housing, schools, or healthcare. This is done in an effort to improve on the norm and to challenge accepted architectural notions, as seen for example, in the work of Moshe Safdie and OMA. The other is when an entirely new program, site condition, or client emerges and forces the invention of a new typology simply through their design requirements.

For his Master’s degree project at the University of Alcalá in Spain, Saúl Ajuria Fernández has envisioned the essential civic building of the future: the Urban Droneport. Located in what Ajuria has identified as a “disused urban vacuum” in Madrid, Spain, the Urban Droneport “allows and optimizes the transport of goods with Remotely Piloted Aircraft Systems in urban areas” - in other words, drone-delivered packages. 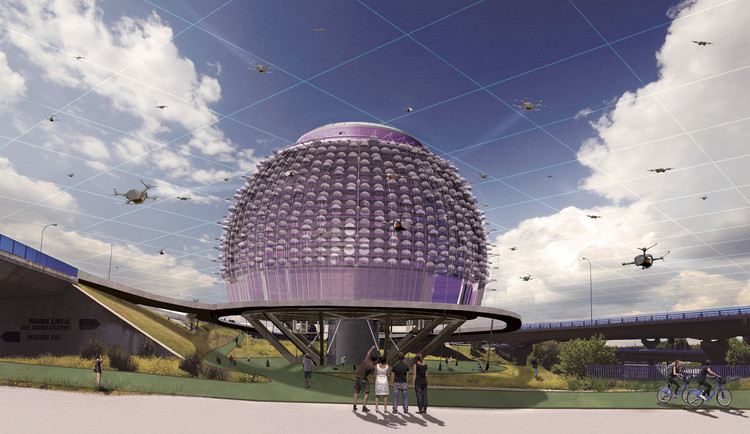 The project is exciting for many reasons, with Ajuria hoping that by designing for something that isn’t completely here yet, it shows how architecture can be “an engine of development and innovation.” Also exciting, for architects at least, is the fact that it provides a glimpse into what could be an entirely new typology of building.

The idea of designing for something completely new is engaging as there are few or no precedents, presenting an entire section of the profession as a blank slate. Of course, this also comes with the responsibility of having to set the stage for future developments in a single design. It is unavoidable that simply through chronology, the first precedent will likely have a disproportionate amount of influence on the future of its typology.

With drones becoming more affordable and more precise, their widespread use in cities is becoming increasingly realistic. Ajuria’s proposal for a drone delivery center is a serious example of an urban opportunity, and may just provide the seed for the development of a new typology.

While it might currently be tricky to envision drones flying alongside pigeons, this sort of architectural accommodation for new technology has been seen before. Perhaps one of the most universal examples of this is the train station. Though commonplace now, in the 19th century the challenge of designing a building that catered for the stopping and starting of trains, alongside passenger needs, was something that had never been approached before.

Like a droneport, train stations are a place of interaction between the mechanical (the train or drone) and the human. In train stations, raised platforms have become common so that passengers no longer need to climb up to the train, assisting a human-mechanical interaction through design. In the Urban Droneport project, as the building’s location is noisy and polluted, the drone hangars form the outer layer of the building. The central space becomes the focus of human habitation, cushioned from the unwanted conditions outside, a spatial solution working in drone-human symbiosis.

The placement of a train station is also important, needing careful consideration of its relationship with a city’s existing rail, road and human networks. Ajuria also took the droneport location seriously, placing it in Madrid’s South Node, a currently unused urban site connecting directly to the highway. Not only does this allow for fast connection with the transit centers of delivery companies - with drones able to use the arteries of highways just as wheeled vehicles do - it also allows the project to be easily adapted to other highway locations.

While the train station typology arose out of necessity, it also came to heighten the experience of travel - black and white photos of light pouring in to Grand Central Station are perhaps the most cinematic example of this. The proportion, color, and care that Ajuria has put into his Urban Droneport’s design also shows this sentiment of celebrating the building’s program.

However, there is one drastic difference between trains and drones: while Grand Central Station does celebrate the commute, it also hides the trains underground. Other stations tend to eject their trains into walled-off cuttings or embankments. Drones however, would not be hidden and separated from the city, but instead occupy the airspace above and around us. This means that architects' response to the promise of “unprecedented multidimensional urban space” and the need for “buildings that work to facilitate drone navigation and communication” could lead to a new typology entirely--potentially even in ways more definitive and integrated than train stations did in the past.

The Three-Dimensional City: How Drones Will Impact the Future Urban Landscape

ArchDaily's previous investigation into how drones could reshape our cities.

NewsArticlesDronesTrain StationTechnology
Cite: Sharon Lam. "This Student Project Shows How Droneports Could Be the Train Stations of the 21st Century" 21 Dec 2016. ArchDaily. Accessed . <https://www.archdaily.com/801464/this-student-project-shows-how-droneports-could-be-the-train-stations-of-the-21st-century> ISSN 0719-8884
Save 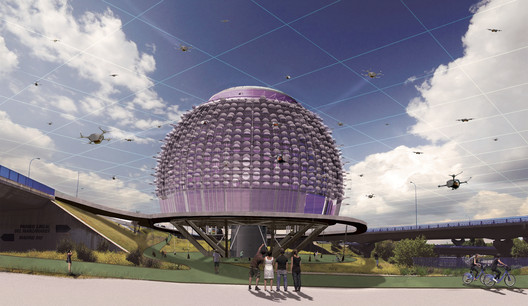