Save
What Exactly is Matti Suuronen's Futuro House?
Share
Or
Copy

The Futuro House looks more like an alien spacecraft than a building. Designed by Finnish architect Matti Suuronen in 1968 as a ski chalet, the radical design was subsequently marketed to the public as a small prefabricated home, easily assembled and installed on virtually any topography. Its plastic construction and futurist aesthetic combined to create a product which is identifiable with both the future and the past. 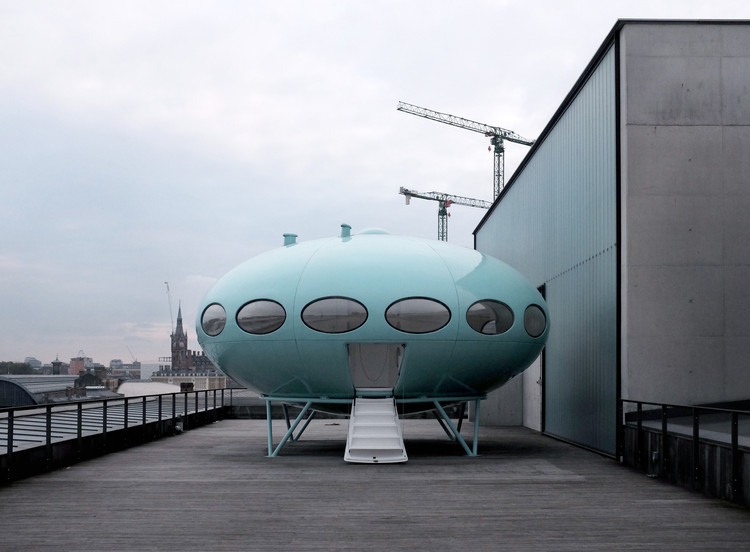 The original project brief which led to the Futuro House called for a small chalet which could be relocated from its initial site as, and when, needed. In order to produce a design that would be easy both to transport and assemble in varying conditions, Suuronen reasoned that a light, prefabricated structure was the ideal solution.[1] The main bulk of the house was supported by a metal ring with four legs that could be adapted for up to a twenty degree incline, obviating the need for arduous grading and excavation before relocation.[2]

While the support legs were wrought of metal, the habitable space was built of what was—at that time—a relatively novel building material: fiberglass-reinforced plastic. A number of factors motivated this unusual choice, namely the reduction of weight – a Futuro House could be lifted by a helicopter should the need arise. Plastic also performed well as insulation, a key concern for a ski chalet. More prominently, however, the material could easily be molded into the rounded, circular form that was considered cutting-edge in the early Space Age.[3,4]

Visitors to a Futuro House climb a stairway through a hatch cut into the underside of the plastic hull. Despite their small floor area of 50 square meters (538 square feet), each unit was built with an open plan living, dining, and kitchenette space, a restroom, and a private bedroom.[5] Other than the metal legs, the entire house comprised eight identical plastic modules—four on top and four on bottom—which could be delivered separately and bolted together on site. Once the design was adapted for mass production, the creation of specialized furniture allowed the houses to be marketed as fully-furnished packages.[5]

Although Suuronen believed the Futuro House’s low production cost and adaptability made it an ideal solution to housing shortages across the globe, the houses never truly caught on with the wider public. Less than a hundred were built before production ended in 1973 when the skyrocketing cost of plastic due to the oil crisis suddenly made the Futuro prohibitively expensive to both manufacture and purchase. Approximately sixty Futuro Houses can still be found today, performing a number of different functions and in varying levels of repair.[6]

While they did not become the new standard in affordable housing that Suuronen envisioned, the impact of the Futuro Houses has been felt far more in the ingenuity of their design than in the volume of their production. Although they were designed fully fifty years ago, their elegantly simple geometry and novel structure ensures that they continue to give the impression of modernity. Somehow, the Futuro House has long outlasted the cultural mindset in which it was conceived, commanding a fascination that survives to this day.