Save
Being an Architect: Then Versus Now
Share
Or
Copy

Architecture, as a profession and discipline, has come a long way since Vitruvius. It continues to evolve alongside culture and technology, reflecting new developments and shifting values in society. Some changes are conscious and originate within the field of architecture itself, made as acts of disciplinary or professional progress; others changes are uncontrollable, arising from architecture's role in the wider world that is also changing. Below are just some of the changes that have taken place in recent decades:

Whether you like it or not, drawing boards have given way to computer screens, with CAD and parametric software now common architectural tools. However, the age old adage of being able to impress a client with a freehand sketch still stands true.

The historic image of the architect was a lone genius, whipping up sculptural forms instantaneously from their minds. Today, architects are more often seen working collaboratively and to great success, such as the Turner Prize-winning group Assemble, or Robert Venturi and Denise Scott Brown, who finally won an AIA Gold Medal in 2015 after a rule change that allowed the prize to be awarded to pairs.

Rules of symmetry, proportion and types of column only make appearances in architecture school these days in relation to history. Long gone are the days of strict design ordinances and in their place is an era of open, creative problem solving.

Though architectural history has been dominated by old white men, this is slowly changing. Women and people of color are starting to be recognized in architecture—recently the AIA Gold Medal went to its first black recipient. However, gender pay gaps and other imbalances mean that there is still progress to be made.

As media in society has become increasingly prominent, so too has its relationship with architecture. Because our understanding and treatment of architecture is tied to its representation, this is a change that is both complex and important.

Increasing media exposure has also increased the inclusivity of architectural appreciation, with TV shows like Grand Designs, podcasts like 99% Invisible, and websites (like this one!) making architecture accessible to many more people than just those who work or study in the field.

Consideration of a building’s environmental impact has become a much more active driver of design in recent years, becoming the entire ethos of a firm in some cases. This is both due to greater awareness of increasingly pressing environmental concerns, as well as advances in technology making sustainability easier to implement.

Unlike many historic building styles, it can be difficult to tell the location of new buildings through their design alone. Collaboration across cultures and international competitions and commissions now allow for design to transcend geographic boundaries—Foster + Partners alone have 15 different offices working on projects across 40 countries.

NewsArticlesSoftwareArchitectsMediaSustainability
Cite: Sharon Lam. "Being an Architect: Then Versus Now" 16 Jan 2017. ArchDaily. Accessed . <https://www.archdaily.com/801166/being-an-architect-then-versus-now> ISSN 0719-8884
Save 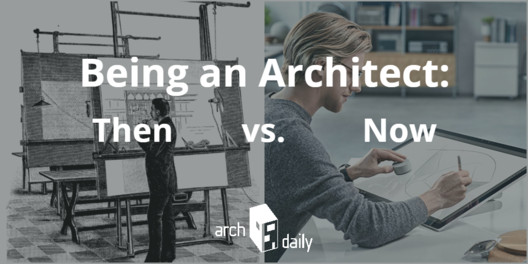